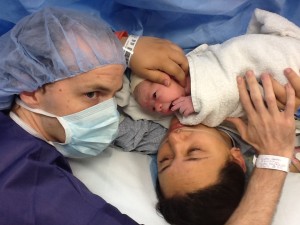 In April 2011 I gave birth to my 3rd child, my first C-section. Four months after my C-section I found myself pregnant with my fourth child, due May 2012. Every baby is a blessing in my eyes, but I was scared and nervous about this pregnancy. The closeness of the pregnancy to my C-section was my primary concern. I was afraid my body didn’t have enough time to heal from the surgical birth only 13 months before. I made an appointment with my Midwives, whom I saw for my 3 previous pregnancies. I knew I wanted a V.B.A.C. (Vaginal Birth After Cesarean). My recovery from my first Cesarean surgery was very difficult and I knew I wanted to avoid that again. Unfortunately, my Midwives didn’t attend VBACs but informed me that the Doctor who performed my Cesarean did VBACs.

I went in for a consultation with that Doctor to discuss my VBAC options. He didn’t show up to the appointment. I met with his nurse practitioner instead. She was very rude to me. She said the most astonishing thoughtless things to me:
“Why would you want a VBAC anyway?”
“It is easier to just schedule a C-section.”
“If you don’t go into spontaneous labor by 39 weeks you will have a C-section anyway.”
“A benefit of a scheduled Cesarean would be that you could get your tubes tied. You are going to have 4 children; you don’t need anymore.”
In response to all of those I told her I wanted a VBAC because I already had 2 vaginal births prior to my C-section so I felt confident that I could have a successful VBAC. And I thought my C-section was not necessary and hospital staff pressured me into it. I have never gone into labor prior to 39 weeks, all of my children were born past 41 weeks, and so the 39-week time constraint wouldn’t be an option for me. And I was 100% was sure I didn’t want my tubes tied. She tried to make me feel guilty about my desire to have a VBAC, and my desire to have more children after my fourth! I ran out of that office so fast and never looked back.

So there I was, 20 weeks pregnant without a care provider, and I didn’t know where to turn. After lots of Internet searches I found ICAN (International Cesarean Awareness Network). I joined my local chapter’s Facebook page and started asking around for supportive VBAC Doctors. I was then directed a Doctor who came very highly recommended, Dr. Damon Cobb in Rancho Bernardo. By the time I had my first appointment with him I was 27 weeks pregnant. He made me feel so at ease, he calmed my fear of the closeness of the pregnancy to my prior C-section. And he was 100% supportive of all of the things I wanted for my VBAC, including allowing my pregnancy to go to 42 weeks if necessary. I hadn’t had any ultrasounds at that point so we quickly scheduled one. My baby measured small. I wasn’t that concerned, because all of my children measured small on ultrasounds, but ended up being 8 to 9+ pounds at birth. But my Doctor was concerned and sent me for specialized ultrasounds. Everything appeared normal, my baby was just small. I got growth scans at every appointment with my Doctor. If my baby ever stopped growing I would need to deliver him immediately. Regardless of this growth issue my Doctor still supported my VBAC.

High Blood Pressure Had Never Before Been An Issue

My pregnancy continued and was going well, my baby still small, but growing. Then I went to my regular 39-week appointment (at 39 weeks 3days) and my blood pressure was high. This had never been an issue at all during my pregnancy. I honestly didn’t even know it could be an issue. I was told to lie down and rest for 15 minutes and they would take my BP again. Still high. We repeated that and it was still high. Then my Doctor came in and told me about pre-eclampsia. “Preeclampsia is a pregnancy complication characterized by high blood pressure and signs of damage to another organ system, often the kidneys. Left untreated, preeclampsia can lead to serious — even fatal — complications for both you and your baby. If you have preeclampsia, the only cure is delivery of your baby.” Mayo Clinic

Off I Went To The Hospital

He told me the only cure would be delivery of the placenta. He wanted me to go to the hospital for blood pressure monitoring and blood and urine tests. Before I left his office, he performed a membrane stripping to try to induce labor. Off I went to the hospital. After a few hours of monitoring and lab tests, all results confirmed pre-eclampsia. The membrane stripping had actually worked and I was already contracting regularly so I was just hooked to magnesium sulfate to help control my BP. About 7 hours into my labor my contractions were very sporadic. They were ranging anywhere from 45 seconds to 90 seconds long and anywhere from 5 minutes apart to back to back. So I was hooked up to a low dose of Pitocin to help regulate them. The attending Doctor also broke my water at that point too. A couple hours later my Doctor had finished up his office hours and came to check on me. At around the 12-hour mark my baby started to have decels in his heart rate, a possible indication of fetal distress. With every contraction his heart rate dropped, but came back up again afterwards. My Doctor came in to try to help get baby and me into a better position in hopes of improving his heart rate. I was given oxygen and had tried every position imaginable.

My Doctor never left my side. 14 hours into my labor, my baby’s heart rate kept getting lower and lower with each contraction and wasn’t coming back into a normal or safe range before the next contraction hit. That is when my Doctor told me my baby would be better off outside the womb. Birth needed to happen immediately. Since I was only 7cms dilated and not ready to push that meant another Cesarean. I cried. My husband held my hand as they wheeled me into the O.R. I was given a spinal block and at 12:34am (39weeks 4days) my baby boy was born. It was exactly 13 months to the day after my first Cesarean birth.

My Son Was Small But Strong

My son was small, but not too small, 5lbs 14 oz. I was told the reason for his heart decels was due to having the umbilical cord around his neck two times. The pediatric nurses saw him right after birth, and he was given a clear bill of health. I was allowed to hold him and do skin to skin contact while I was still on the operating table. We went back to our room together. He breastfed like a champ and we were discharged after a couple of days. I continued to have blood pressure issues and had to be on medicine for my entire postpartum period. The recovery from my Cesarean surgery was much easier than my first C-section. My son just celebrated his 3rd birthday, he is still very small for his age, but that doesn’t slow him down at all. 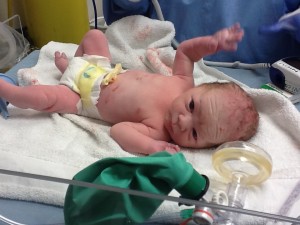