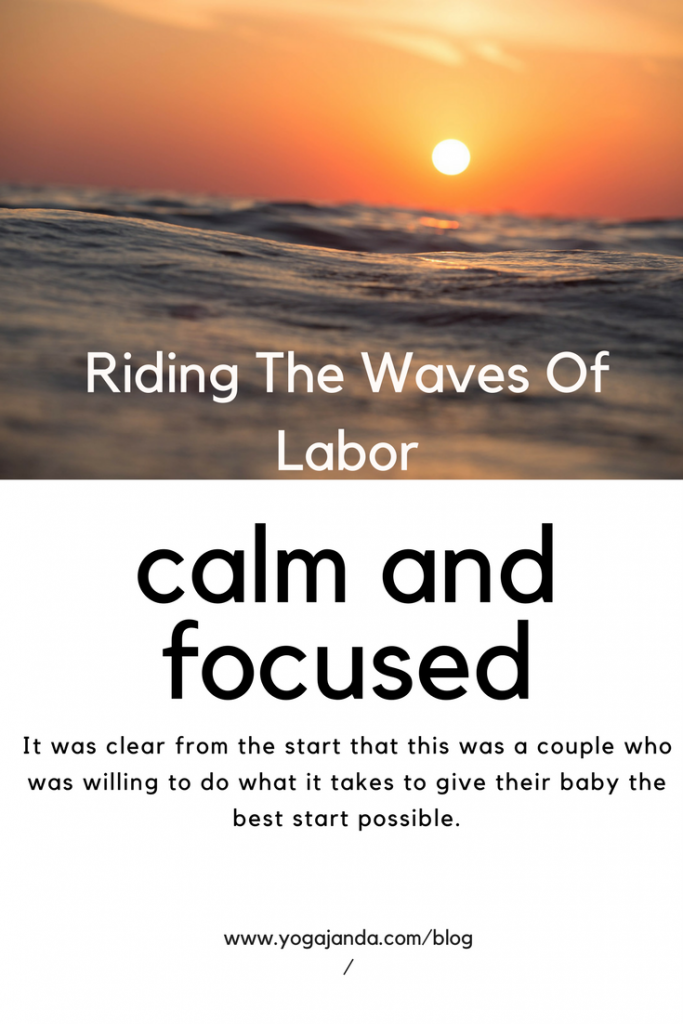 Nicole and Chris Fortunato hired me as their birth doula several months before their Feb. 9th due date.  It was clear from the start that this was a couple who was willing to do what it takes to give their baby the best start possible.  Nicole taking breaks from her busy work schedule to take Bradley Method® birth classes and educate herself about childbirth, Chris standing by, ready to do whatever Nicole needed to have a successful unmedicated birth.  At our prenatal visit we talked about birth plans and relaxation techniques.  Nicole stated that her main reason for hiring me was to have someone to help her relax, something she would prove to be great at doing on her own when labor would begin.

Friday Jan. 27th I received a text from Chris letting me know that Nicole had began to experience some contractions.  He told me that they were still manageable and he would notify my when they became stronger and closer together.  At around 11:30pm Jan 27th I received a phone call that Nicole’s contractions were getting much stronger and about 3-4 min. apart.  Chris told me that Nicole was getting anxious and thinking about going to the hospital.  I reminded them that they wanted to stay home as long as possible and told them that I was on my way.

I arrived at the Fortunato home at around 12:30am Jan 28th and was told Nicole was upstairs.  When I entered the bedroom Nicole was bent forward over the bed breathing through a contraction.  Between contractions she told me she was experience a lot of back pain an was very tired from being up on her feet all night.  We spent the next couple of hours walking the halls between contractions.  Nicole took several showers and reported that it helped with the pain.  As each wave of contractions came Nicole fell into natural rhythmic breathing and opened her palms upward.  She later told me she was remembering what she learned in yoga and telling herself ‘open palms, receiving grace’.  As the morning carried on Nicole reported being more and more tired.  She tried laying down and resting for a while and experienced some pretty intense contractions while laying down.  She got up to walk around again around 7 am.  Shortly after her contractions seemed to decrease in intensity and in length.  Nicole used this time to rest in the chair for a while.

When contractions didn’t resume their previous strength and succession we decided to go for a walk outside.  Nicole experienced some contractions during the walk but still not like she had overnight.  We went inside and Nicole rested on the chair and was able to  eat some light snacks and some water.  Around 11am when contractions still hadn’t resumed Nicole decided to try acupuncture to help move things along.  Chris made an appointment at ‘Oceanside Acupuncture Clinic’ where they were nice enough to come in on the weekend to help Nicole out.  They used points meant to help soften the cervix and it seemed to help Nicole reach a place of calm.  After we went for a long walk on the beach at buccaneer park where Nicole continued to experience some contractions about 10min. Apart lasting about 30 sec.  When we returned home we talked about why Nicole’s labor may have slowed.  I explained that while what she was experiencing last night was real labor, her body seemed to be taking a break and would probably pick back up again when it was ready.  I suggested that Nicole rest while she could because she most likely would have a lot of work to do that night.  We all took the time to rest for several hours.  Nicole was able to sleep from about 3pm until around 11pm that night.  At 11pm her contractions started up again quick and strong.

At 12am Jan. 29th Nicole reported being ready to go to the hospital and it was clear that this time she was ready.  She was no longer talking through or between her contractions and was using all of her energy and focus to breath through each wave.  At this point Nicole reported being very cold and shivering.  We loaded up the care and headed over to Scripps Hospital Encinitas.   When we arrived at the hospital Nicole was so tired and shaky that she took a wheelchair from outside of the hospital into the birth pavilion.

When we arrived at the Hospital we were put in Labor and Delivery room 2.  Nicole was given a cervical exam and was already dilated to 6cm!  She was then hooked up to external fetal monitors and given an IV and antibiotics for her postie strep B. culture.  The nurses reported that Nicole was very dehydrated.  Nicole was told she would need to stay on the monitors for 20 min. After 20 min. the nurses reported that they were not able to get a good read on the baby and that Nicole would need stay on the monitor.  They also took her temperature and discovered that she had a temperature.  They later confirmed that she had a urine infection.  The baby’s heart read a little flat and so Nicole was required to stay on the external monitor and IV throughout her labor.  Nicole’s Dr., Dr. Zaid was not on call that night she as attended to by Dr. Truong.

During labor Nicole experienced a lot of back pain.  Chris did a great job of doing hip compressions while Nicole was laying in bed and seated on the ball.    Nicole did a great job moving despite the limitations of the monitors and switched from side to side, sat on the side of the bed and sat on the birth ball.  At 4 am Nicole was checked and had progressed to 7cm.  We worked through breathing and used tennis balls to help relieve some back pain.  At this point nicole was getting very tired and had to be reminded often that she was doing a great job and the baby was coming soon!  As contractions grew stronger and closer together Nicole continued to practice her breathing techniques and did a great job of staying focused and centered throughout transition.  Her nurse would later comment that watching her deal with her labor had made her consider having her next child unmedicated.

At Approx. 8am Nicole was checked and was still at 8 cm.  Dr. Truong suggested that Nicole was not progressing at a fast enough rate and was in need of petocin.  Nicole and Chris asked for some time to think about it.   Shortly after her cervical check Nicole got up to use the bathroom.  She then reported the urge to push!   Nicole then moved back to bed and reported that these contractions were different.  Nicole was checked and told she was aloud to push at 9:25am.  Nicole got into a hands a knees position on the bed and pushed for a while.  She did great at continuing her breathing.  It was clear that pushing was very intense for Nicole but she handled it wonderfully.  She then moved to a squatting position with the squat bar and this seemed to really move things along.  It was only 3 or 4 pushes on the bar and the baby’s head appeared.  Because Nicole began to tear the nurses ask that she lean back on the bed and breath through the pushing urge to allow her perineum time to stretch.  At this point the urge was so strong that I needed to help guide Nicole’s breathing.  Chris did a great job of encouraging Nicole along and announced with Joy that the baby was coming and he could see the head.  Because of how quickly Nicole went from 8cm to crowning her Dr. was not able to be there in time for the delivery.  Dr. Miller was called in.  Dr. miller didn’t even have time to change her clothes and threw on a surgical gown over he street clothes and told Nicole she was allowed to push.  Within 2 pushes the baby was born at 9:59am at 18.5 inches weighing 6 pounds 10 oz.  The dr. placed the baby onto Nicole and and Chris and Nicole admired their new baby boy.  Once the placenta was delivered and the cord stopped pulsing Chris was able to cute the chord.

Nicole tore slightly during the pushing and by this time Dr. Truong had arrived.   Dr. Truong saw some clots she was concerned about and went in for a uterine sweep.  She found some pieces of the placenta left and had to go back in 4 more times.  Nicole was very brave and refused morphine even when offered several times because she didn’t want anything to interfere with here awareness as she bonded with her new baby.   Once this was over the baby was placed on Nicole’s chest and before long breastfeeding was established.

I was so blessed to be a part of this beautiful birth.  Nicole handled her contractions with amazing calm and focus.  Chris was so supportive and was always ready with words of encouragement and even the occasional joke.  Gianni Angelo Fortunato made a beautiful unmedicated entrance into the world and it was clear right from the start that he is very loved.