My Due Date Baby- The Birth of Warren Frances at Babies in Bloom Birth Center, A Bradley Method Birth Story

What Is This Tightness In my Belly? 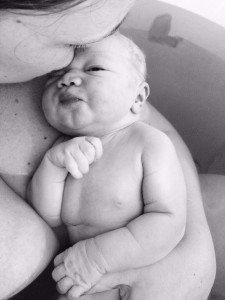 I had myself convinced that I was going to carry my baby far past her due date. I was expecting to feel that labor was coming. Some sort of change in my body that let me know things were going to start happening. It wasn’t until the night before my due date that I felt anything. Around 6pm I started feeling some tightness in my belly but it felt a lot like the Braxton Hicks I had been feeling for months. The only difference was that these contractions were coming at regular intervals. They were barely enough to even grab my attention though, so I carried on with my evening. My husband and I took a long walk and I cooked a big dinner. I mentioned to Ben, my husband, that I was feeling some tightness in my belly but I didn’t think anything was imminent. I thought I could be feeling those contractions for days.

Ignore Your Labor and Get Some Rest

Around 10pm, I decided to go to bed. Just in case things picked up, I wanted to be sure I was well rested. I tossed and turned a bit and was in and out of light sleep for a couple hours but by midnight the contractions were strong enough that I couldn’t sleep. I decided to try some relaxation on my own while I let my husband sleep. If this was the beginning of labor, I wanted him well rested. I moved to the living room floor and was able to get semi-comfortable in the side-laying position for a while, while the contractions surged on. Around 2am I could no longer lie down so I was up and pacing. The contractions were getting strong and were about 5 minutes apart but were varying between 30 seconds and a minute and a half at a time. I kept trying different laboring positions to find what felt comfortable. It was about this time that the back labor kicked into gear. That made things feel far more intense and I started to feel quite nauseous. I found myself on my hands and knees with each contraction.

Wake Up! This Is The Real Thing!

At 4am, I needed assistance so I woke my husband. I told him I was sure this was real labor and that he should call our midwife to let her know our status. He was in no rush though. He reminded me that I still had plenty of labor to go and that I just needed to focus and remain calm and relaxed. At some point he did call her, however I was unaware of it. I was moving deeper into myself with each contraction. By 6:00am I told him we needed to go to the birth center. I had vomited twice by this time.

A Bradley Coach Who Knows Just What To Do

Ben told me to get in the shower while he called our midwife to discuss the plan. The shower felt incredible. I had no idea it would relieve me of so much tension. I lost track of time while I was in there but the contractions felt way more manageable under the heat of the water. However, the moment I got out the intensity rose again. When I got out of the shower Ben was on the phone with our midwife and I hear him say, “Yes, she is still talking; we can wait another hour.” WHAT?! Another hour?! That seemed far too long to me but I trusted him.

Nothing Better Than An “Aqua-Dural” To Ease Transition

We got to the birthing center right at 8am and they had tub filling up for me. I had stopped timing my contractions but I could tell they were pretty close. All I wanted to do was get in that tub. The warmth of the water was very calming and the feeling of weightlessness was a godsend. I was able to move freely within the tub to different positions with ease. My back labor was very intense so I was thankful that the weight of the baby and myself were not putting any pressure on my back. After being in the tub for about an hour, my contractions were pretty much constant. I was maybe given a 30 second rest every 4-5 minutes of straight contractions. They would rise and fall but wouldn’t cease. I would call this my transition. I was completely inside myself. I couldn’t communicate at all. Not a word. I could give a slight nod if needed but that was all I could bring myself to do. I was hardly aware of anyone in the room besides my husband as he was right by my side helping me through each surge.

Intensity I Cannot Describe And Everything Was Right

The intensity is something I cannot describe. It was painful, yes, but not in the way I had ever experienced pain. Uncomfortable, extreme intensity is a better way to describe it. The feeling, while not pleasant, did not feel abnormal. It wasn’t like breaking a bone where something is going wrong inside your body. The intensity of contractions felt natural. I could tell this was something my body was supposed to be doing. There was a purpose. It was working hard. Harder than I ever thought my body was capable of. But at no point did I feel like something was abnormal or wrong. Which is why I have a hard time calling it pain.

“It Appears You Are Pushing.”

By noon, I was pushing. I didn’t really realize it at first. It was almost involuntary. Ben kept telling me to breathe and stop holding my breath. He didn’t realize I was pushing either. It was my midwife who enlightened us. She said, “Ok it appears you are pushing, is that correct?” I nodded. I felt like I was pushing for a long time. I remember when my daughter’s head started to emerge. My midwife told me to reach down and touch it. When I did, I didn’t think it was her head. I am not sure what I thought it was, but it didn’t feel like a head. It felt too soft. When I told my midwife, she informed me that she was still in the amniotic sack and that was what I was feeling. I hadn’t realized my water hadn’t broke yet. It hadn’t occurred to me since I had been in the tub the last 4 hours. I continued to push and it seemed she wasn’t coming out any further!! Then finally, I could tell her head was almost out.

What A Glorious Day It Was

My husband got into position and was ready to catch her when the time came. I pushed with all my might and soon, her head popped out. Then there was a long break before my next contraction. I kept waiting and waiting until it finally came. And with one last long push, my water broke and out came the most beautiful person I had ever seen. My husband’s hands were wrapped around her and as he was bringing her out of the water I reached down to grab her and bring her to my chest. The rest of the day was euphoric. Warren Frances was born at 12:32pm on her due date March 10th, 2015. And what a glorious day it was.