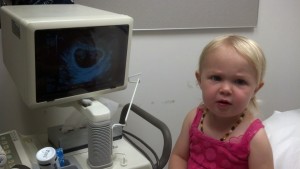 Baby 1 was nearing 18 months and we decided to start trying for a sibling. After 2 months of trying, the pregnancy test came up positive. Time to see the doctor. We’d been through this before – ultrasound to check for a heartbeat, due date given, and congratulations given – but this time was different. As I lay on the table waiting for the ultrasound image to clear the NP got a weird smirk on her face. “No, really?” She nodded.  “Seriously?” She nodded again. This went on for about 5 minutes as reality sank in.  Finally she spoke, “twins.” “Seriously!?” It took me about a week to come to the realization that I was having twins. 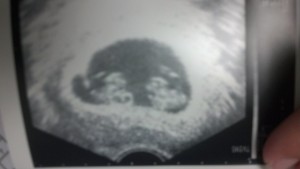 Being pregnant with twins my OB had me also see a perinatologist. Between my regular OB appointments and the additional specialist appointments I probably saw a doctor more during my pregnancy than I had in my 30 something years of life. Twins can also be scary, aside from the whole twin thing, there is a list of things that can go wrong. My twins were mono-di twins, meaning 1 placenta that they shared, but they each had their own amniotic sac. Which was a blessing because then we didn’t have to worry about them getting entangled in each others cords; now we just had to worry about Twin-to-Twin Transfusion.

Twin A was constantly measuring 2 weeks ahead of gestation, but Twin B was holding right around gestation, which made the doctors suspicious. Monitor, measure, and repeat, we finally made it to 24 weeks, and the specialist ruled out Twin-to-Twin. I hadn’t been put on bed rest, no gestational diabetes, no high blood pressure, the twins were growing and doing well, whatever I was doing my doc told me to keep at it.

Not How I Planned My Day

The time had come for me to see the doctor twice a week for non-stress tests and check-ups. The NST had become routine, nothing out of the ordinary, good fetal movement, no contractions, see you next appointment. Today I was 35+5, I’d been doing well, the doc told me to get to 36 weeks and we’d talk delivery options. Twin A was head down and ready to go but B was breech still, and my doctor didn’t feel comfortable trying to turn them when they were small. So as I sat in the chair for yet another NST. I figured I was in the clear. 2 days to go? I got this. I still had a few minutes left on my test but the NP had a personal appointment she needed to leave for, so another doctor was going to check on me and send be home when my test was done. The doctor got held up by a patient and in that time my body decided to have a contraction. Nothing serious, I didn’t even realize it happened, but the doctor noticed Twin B’s heart rate dropped during the contraction. “Nothing to worry about but I’d like you to go to the hospital for further monitoring.” Huh, this is not how I planned my day.

I was so happy I packed snacks and games for my oldest because sitting in triage is not fun for a toddler. In case of emergency, I was told not to eat or drink anything…that is not fun for a pregnant lady. As I sat in triage more contractions came, but they were nothing like my first labor, these felt like B was stretching up into my ribs. Doctors wanted an ultrasound. Yup, B was still wrapped in her cord, twice. B’s heart rate was still dropping during contractions so that meant I was getting admitted. I arrived in triage a little after noon; I was admitted around 7pm, right in time for shift change. The doctor came in, introduced herself, and asked if anyone had checked me. I told her I’d been hooked up to a machine all day and nobody had even bothered. She checked me and I was 4cm. “You’re doing good mom, and the babies are still holding up, so I’ll come back in 2 hours and see how we’re doing.”

I used that 2 hours to find a friend to watch my daughter for the night, her 1st sleepover, since my mom hadn’t arrived (hindsight, when I talked to her that afternoon I should have told her to get in the car). I was also missing taco Tuesday, man I could have killed for a taco. 9pm arrived and the doctor was back; I was now at 6cm, active labor. The doctor had talked to my OB and read my chart so she knew I wanted to avoid a c-section, so she gave me my options. 1) with the way my labor was progressing I’d likely deliver sometime that night. A was head down and presenting 1st so I could attempt to deliver her vaginally and hope that B would then turn, but since B was wrapped in her cord there was a good chance she’d stay put and I’d have to have a c-section. 2) bite the bullet and have the c-section. B’s heart rate was still dropping with the contractions but it kept rebounding, so the worry was that she’d eventually get stressed. So here I was, do I wait, hope that B doesn’t get stressed turning this into an emergency, and hope she turns so I can deliver vaginally without a piggyback c-section? Or, do I play it safe, opt for the c-section and give them a cool birthday (11/12/13), and put this in my court on my terms? 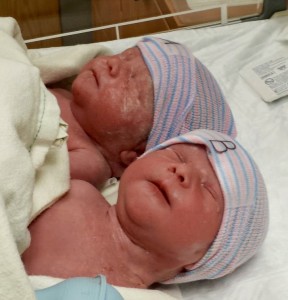 Baby A and Baby B

I opted for the c-section not wanting to put the twins at risk, and the possibility of having to recover from a vaginal birth and a c-section wasn’t enticing either. As soon as I said go they started prepping me (fyi, the anti nausea meds they give you are horrible the 1st time, and are even worse the 2nd time around). I walked into the OR, had a nice little chat with my anesthesiologist while he did the spinal block and they prepped me for surgery. It was discovered Kaitlyn was wrapped in her cord 3 times, maybe the c-section was a good idea after all. 9:41pm Twin A, Kenzie, was born at 6 pounds 7 ounces, followed by B, Kaitlyn, at 9:42pm weighing in at 5 pounds 1 ounce. Both were healthy and never spent a second in the NICU.

Here are some photos of Susan practicing Postnatal Yoga with all 3 babes! 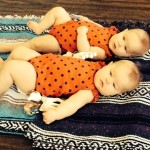 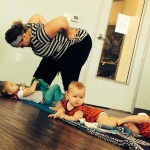 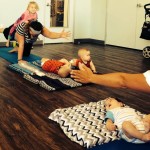 After the baby arrives, get back in shape with this Postnatal Flow led by Liza Janda