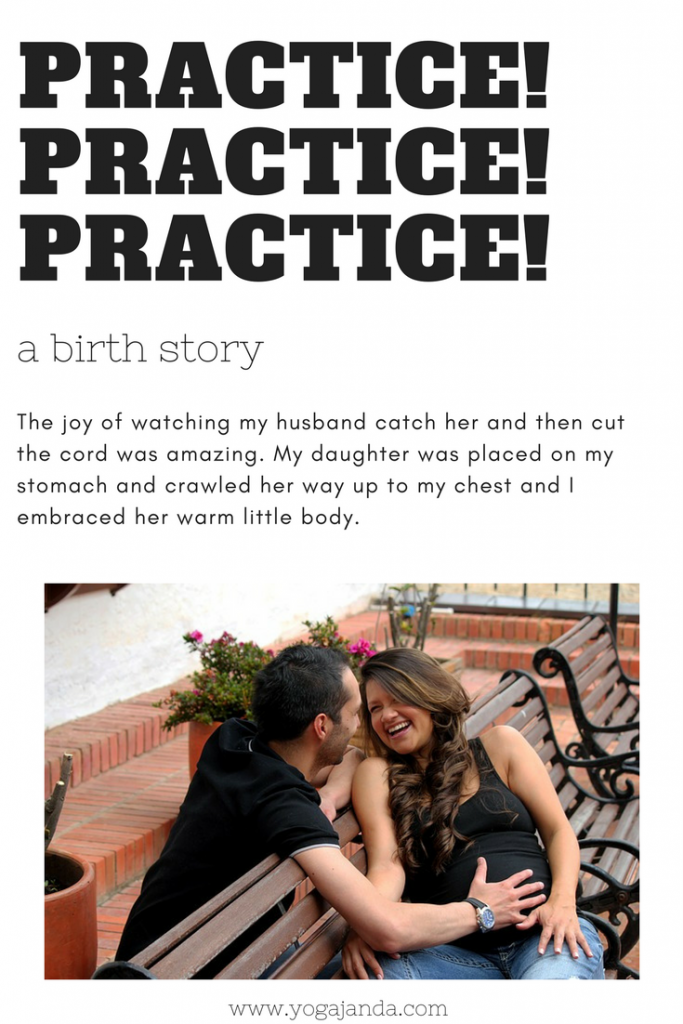 Thursday June 14, 2012, came and went. However, it was not a typical Thursday. I woke up as usual at 8:30 a.m. to get ready for my cycle class at the gym. At 8:33 a.m. I felt a slight gush of water as I walked around. I didn’t think much of it so I continued to get ready for the gym. Time continued to pass and I didn’t think anything of it since I was not due until June 27th. Even though I was 38 weeks pregnant and considered full term, I told myself it was too early to go into labor or let alone for my water to break. I asked a close friend who had just given birth to her third child a week earlier what she thought it might be. She indicated that it could be my mucous plug. However, I continued to feel gushes of water as time went on. I decided to wake my husband and let him know what was happening. He advised me to call the midwife and not go to the gym (yes I was still trying to get to my cycle class).

Once I spoke with the midwife who indicated that it was not an emergency and it sounded like my water broke she instructed me to make my way to the labor and delivery unit to test the liquid that was gushing out. Since it was not an emergency my husband and I decided to take our time getting to labor and delivery. We cooked breakfast and then I showered to make sure I was nice and relaxed. We grabbed our birth kit and our over night bag and headed to labor and delivery. At that point I was a little nervous because I was not feeling any contractions and I knew that I had 18 hours before I was at risk of getting an infection and I did not want to get induced. During our drive to the hospital, my husband and I had agreed that if everything was ok, we would drive back home to labor as much as we could with our Doula.

We arrived at labor and delivery at approximately 12:30 p.m. The nurse checked the baby’s heart beat and everything sounded normal. The midwife arrived and tested the liquid and it was confirmed that I had a spontaneous rupture of membranes. We were told that I would be checked into the hospital and that I could not go back home and labor. My heart dropped and my husband and I immediately became upset. The midwife informed us that it was a new hospital policy that if you arrived to the hospital with your water broken they could not let you go back home to labor. She indicated that if we did leave hospital grounds I would not be eligible to labor in the birthing center. We were so upset but we decided to re-focus and stay positive. It was around 1:30p.m. and a room in the birthing center would not be available for us until 4p.m. I finally began to feel contractions around 2p.m. which made me excited and nervous at the same time because I was finally going into labor (naturally). We had lunch at the hospital cafeteria (since we couldn’t leave the grounds) and then we made our way to the lobby where I walked around in circles until 4p.m.

Four o’clock finally arrived and we went to check in at the birthing center. We were given one of the big rooms that had a king size four post bed and a tub to labor in. It was 5p.m. when my mother and sisters arrived at the birthing center. At that point my contractions were getting a little stronger, longer, and closer together but they were still manageable and I was still able to have conversations. Around 7p.m. things started to pick up and my contractions were a lot stronger, longer, and closer together, I was in active labor. I tried several positions which included side lying, rocking on the birth ball, walking, and leaning over while holding on to one of the post on the bed (this position really worked for me). As active labor continued things were getting really intense. My contractions were very strong and were right on top of each other. I didn’t have any breaks in between them. At that point I felt like I could no longer do it and my husband reminded me that by saying that I was in transition and I was close to meeting our daughter. Finally I was able to get into to the tub and continue my labor. I had no idea how I was going to get into the tub from the bed because the contractions were killing me. Once I got into the tub it was a huge relief. Laboring in the tub was very relaxing and the contractions felt more manageable. While in the tub I began to feel a huge sensation to push. The midwife was able to confirm that I was dilated enough to push. Once I changed my breathing and was able to establish a good pattern of birthing and curling the pushing sensation became easier to handle. The hospital’s policy did not allow for a water birth so I could only labor in the tub until the baby began to crown (I could remember wanting to curse at the nurse for not letting me deliver in the water). After pushing for sometime the baby began to crown and I somehow managed to get up and walk back to the bed to resume my pushing. I pushed for approximately 45 minutes. On June 15, 2012, at 2:09 a.m. our beautiful Charlotte Aleah Maldonado was born, weighing 6lbs 11oz and 18 inches long.

The joy of watching my husband catch her and then cut the cord was amazing. My daughter was placed on my stomach and crawled her way up to my chest and I embraced her warm little body. The third stage of labor did not go as I planned. Because I had a slight tear and I would not stop bleeding the midwife was forced to give me pitocin or risk hemorrhaging. Delivering the placenta was not a pretty sight at all and I was surprised by its size. After all was said and done both my daughter and I were alive and healthy.

My husband and I are extremely proud and thank God everyday for allowing us to have a natural birth as planned. I labored for a total of 12 hours which was short for a first birth. I can only describe the entire process as an out of body experience and definitely an experience I could never forget!