Sometimes, An Epidural Is A Good Thing 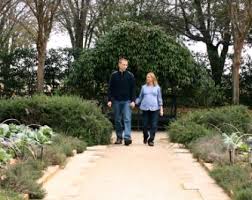 For the 2 weeks before my due date, I was growing increasingly impatient. I wanted to meet this baby already! I started massaging the labor inducing pressure points, eating spicier foods, and going for long walks. The weekend before the due date, Nico and I walked about 9 miles over a 4 day period….”C’mon baby!”

On March 23 I started having contractions from about 3-8:30 AM. They weren’t super strong so I ignored them like we had been taught in Bradley class. At 8:30 I got up to get stuff ready if today was “Labor” day. Well, the contractions stopped. I tried not to get too bummed knowing this was my body get ready for the real thing.

At 1:30 AM on the 24th, contractions started again, but I decided to go back to 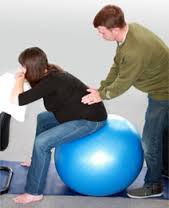 sleep and not get my hopes up. At 3:30 I was woken up by the contractions but rested until 5:30. I got up so I wouldn’t bother Nico. I sat on the big yoga ball and bounced and rolled around to see if this would change the contractions at all; no change! “Woo hoo!” The contractions started to get stronger and closer together. The “birth ball” felt great to bounce on. Around 7:30 Nico got up and started timing the contractions- 34 seconds, 4.5 minutes apart. We added the last minute items to our hospital bags and loaded the car before going to our scheduled Doctor appointment, just in case.

Our appointment was at 10 and I was anxious to find out how much my body had done so far! At my appointment the week before I was 50% effaced and 1 cm dilated. I was about the same. They monitored my contractions for 20 minutes and noticed a consistent dip in the baby’s heart rate after contractions and recommended we go to the hospital for an hour of monitoring. We weren’t super excited about this but as we weren’t being admitted we decided to go.

At the hospital, we were taken to our large private room and I was asked to change and was hooked up to external monitors. Our nurse Sheila was great. She reassured us that everything was looking ok. She told us that if every woman was consistently monitored most wouldn’t make it past 35 weeks as something would always come up. 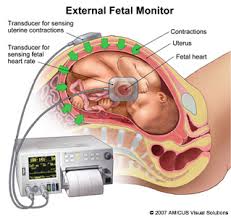 This made me feel a lot better so Nico and I hung out and watched the screen with each contraction.The most annoying thing about being plugged in was having to get up for the bathroom! It was such a process! At 1PM, they decided to admit me. My contractions were coming stronger and closer together. I was able to rest between the contractions but was starting to get pretty focused during them.  We set up a chair next to the bed for me. I ended up being most comfortable leaning on the bed for support while standing and rocking my hips back and forth. Around this time I told Nico that if I was going to just end up with a C section they should just take me now so I didn’t have to go through all of this. I don’t remember what he said but he was very supportive of me continuing and to not focus on a C section. All of a sudden I started feeling like I was going to be sick…YESSSS!!! I thought, “This is transition!!!! This will all be over soon:)”

I remember hearing Sheila calling the Dr and telling her I was already 7 cm and she should try and get here ASAP. Shortly after this I started having a very strong urge to push. Sheila told me I couldn’t as I was only 9.5cm and my cervix had a lip. So instead she told me to scream because it relieves pressure down below. Boy did I scream! I have never experienced such an intense feeling as that urge to push. I was shaking and it felt like my insides were going to explode. At some point I heard her talking to the Dr. I could hear the Dr saying she would be there around 5… I looked at the clock at this point, That was an hour away! I couldn’t do this until then!!

I told Sheila I didn’t care if the baby came and the Dr wasn’t here! So I started pushing. Well since I had a lip on my cervix Sheila tried to push it back with each contraction. This was indescribable pain but if that’s what I had to do to be able to push and not hold it I was willing to. Finally the Dr got there and she tried helping me by pushing on that lip. I had enough I told them I couldn’t handle it and wanted my cervix left alone!

I ended up pushing for about 3 hours. Trying a few positions; sitting position, side lying, backwards kneeling on the bed with it up and using the head of the bed for support. Nothing! Being told that after all of that time and energy and the baby had made ZERO progress was depressing and I was exhausted. I couldn’t do this for much longer and then I would end up with a c section! During all of this Nico was so supportive and really encouraged me. 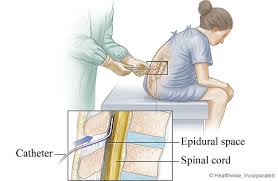 I decided to get an epidural. I was completely drained. Thankfully there had been a shift change and the anesthesiologist was there fast! Contractions at this point were so intense! In about 15 minutes the epidural was in place and I started to get some relief. I could’ve kissed him I felt so good! They told me to try and take a nap and they would be back in a while to try pushing again.

45-60 minutes later it was time to push again. I could still wiggle my toes and feel slight sensation in my uterus during contracting. This really helped me to know when to push. However my efforts were going nowhere again. Around this time is the first I remember hearing the baby was sunny side up. No wonder this was so hard!

positions and techniques to help me. We wrapped a sheet around the squatting bar and I would pull up on that-nothing. We tried playing tug of war with the sheet-nothing. I had enough feeling to try squatting-nothing. Side lying-nothing. The Dr came back in the room and said maybe we should try some Pitocin. Well I guess that was the threat I needed to get this baby out! I asked for a little more time without it and she said ok.

One of the midwives from my OB’s office was the next to come in for assistance. She would tap me in different parts of the birth canal and tell me to try and push there. This was actually working! Finally!! She continued to do this and I could finally feel that the baby was making his way down, but he kept going back up. Then I remembered Liza telling us to use our Kegel muscle to hold the baby in place between pushes! Soon he was crowning and I reached down to feel the top of his head.

Now I was even more motivated! I remember her telling me to slow down so I didn’t tear but I couldn’t stop and out he came. He arrived earth-side on his due date at 11:50 PM! I remember feeling so relieved and laughing after he was delivered. It was all over and I finally got to meet our baby!

He latched on pretty quickly and just wanted to stay like that for a while. Over all I had a pretty positive experience. I am glad that we were so well prepared for birth and knew the signposts. Although it didn’t go how we had planned I wouldn’t change too much, except having the baby in the right position😜

Written by Kate, Edited by Liza