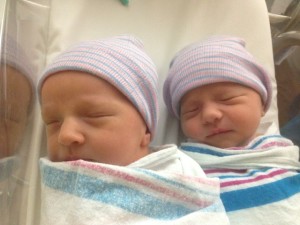 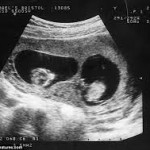 Years before becoming pregnant, I knew I wanted to have a home birth and I researched accordingly. In October 2013, we found out I was pregnant and were surprised at our first ultrasound when we were told it was twins. Although I found twin home birth stories online, my husband and I decided to go through our HMO, Kaiser Permanente. I was quite nervous about having to fight the big, bad HMO to have the natural birth I wanted, especially since it was a twin pregnancy. Ultimately, we experienced very little resistance and were very pleased with the outcome.

No Labor Induction For Me!

My Kaiser doctor, Maria Elswick, was very supportive of a natural birth. She insisted, though, that if I didn’t go in to labor by 38 weeks, labor would be induced. I think this had more to do with Kaiser’s policy than what she was comfortable with. I absolutely did not want to be induced. I knew having labor induced increased my chances of having an unplanned cesarean. My labor was scheduled to be induced at 37 weeks and 6 days but I was determined to do whatever I could to go in to labor on my own.

On Monday June 16th she attempted to do a cervical check. My cervix was high and it was too uncomfortable, for me, for her to reach it. That evening I went to Liza’s prenatal yoga class and made another jug of raspberry leaf tea to encourage labor to begin. Tuesday night, “I bit the bullet”, and did some nipple stimulation to try to get labor started. That night I slept worse than usual. I had been experiencing Braxton Hicks contractions for a few weeks. Every time I rolled out of bed, my belly contracted hard (2-3 times a night to use the bathroom). At 6:00 am I gave up trying to sleep. As I got up, my belly hardened with a contraction, but this was different! I could feel pressure on my cervix, probably the babies’ head pushing down. 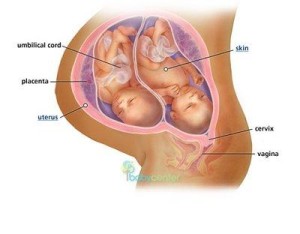 Could This Be It?

I went to the bathroom and found a light swipe of blood on the toilet paper. I thought “Cool, maybe I’ll have my bloody show (aka lose my mucous plug) in the next few days.” I felt excited! I ate some breakfast and noted I was having more Braxton Hicks contractions than usual and I continued to feel the pressure on my cervix. I had the urge to urinate several times and every time I wiped there was more pinkish colored blood. This must be my mucous plug! By about 7:30 am my contractions were becoming increasingly uncomfortable, I called my husband at work to tell him I thought maybe my labor was starting. He arrived at about 8:30 am to find me pacing and swaying, and definitely in labor. The physical force on my cervix was constant. With each contraction, the pressure became painful. I tried all the comfort measures we could remember: sitting on the birth ball, massage, pressing the hips together, sitting on the toilet etc. Nothing made me comfortable!  Sitting was especially uncomfortable because of the pressure on my cervix. 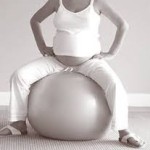 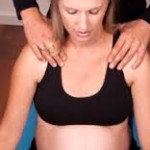 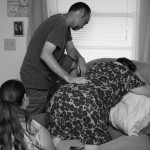 My husband drew me a bath and I labored more comfortably laying on my side in the water. I tried to eat but couldn’t do it. I did drink lots of water though. My husband tried to time my contractions, but I couldn’t speak to tell him when one was starting, it was also difficult for me to identify when they started or stopped because of the constant pain and pressure on my cervix. By 11:00 am I insisted on going to the hospital, I couldn’t speak and I was having the urge to push. It took about an hour to get there, and while in the car, the contractions became more bearable. In the bath, I kept thinking that if the pain got worse I couldn’t continue without drugs-a classic sign of transition!

Upon arrival at the Kaiser Hospital, they read my birth plan, checked my cervix and found I was fully dilated. My water had broken, but I had no idea when it happened. I was taken to an operating room, standard procedure for a twin delivery at their hospital. They have to be ready for cesarean just in case. I opted to have a Heparin Lock, I was told twin pregnancies are at higher risk for hemorrhage and they would give me Pitocin to stop the bleeding. The O.R. was being set up around my husband and me. It was about 1:30 pm before I was on the table and pushing. Once the pushing started I wasn’t in pain anymore and the pressure on my cervix was gone. I was flat on my back on an O.R. table with my legs strapped in to stirrups up to my knees, not at all the birth I had imagined. The room was very quiet the whole time and I dozed between contractions. My husband said he didn’t expect it to be so boring, ha ha.

Pitocin And A Presenting Shoulder

I pushed with all my strength for about 2 1/2 hours before the first baby was delivered. I am convinced that had I been in a regular room and able to try different positions the pushing wouldn’t have taken so long. After delivering the first baby my contractions stopped and they wanted to give me Pitocin to start them up again, I said yes, but was scared it was going to lead to a cesarean or very painful contractions. I was so tired and thirsty, they wouldn’t let me have water or ice, and I didn’t think I had it in me to push out another baby. Both babies were head down and now that Baby A was out Baby B shifted and a shoulder was presenting instead of the head. The doctor had to reach inside and pull the baby’s head into place, if they couldn’t get the baby in place they would perform a cesarean.

That’s when things got exciting and the curse words started to fly. It hurt! Once Baby B was in place I started pushing again, I pushed for 3 1/2 hours. At some point the baby’s heart rate dropped and they gave me an oxygen mask. The doctor gave me the option to use the vacuum to help get the baby out, after trying a couple more pushes I agreed to it. Finally Baby B was born, face up, and the doctor said that’s why the second delivery was more difficult. Our son was born first, 6 lbs. 15 oz. and our daughter was 6 lbs. 11 oz.  There was some difficulty delivering the placentas. After I delivered the placentas, I wound up losing about 2 pints of blood. The possibility of hemorrhage was a reality. I was given a blood transfusion and had to stay in recovery for several hours before being sent to a postpartum room. My babies were with me in the recovery room. Once I had the strength, I held them and tried breastfeeding. The hemorrhage left me weak and anemic, it was a few weeks before I had my strength back. Even though it wasn’t my dream home birth it was still an incredible experience, the hospital staff and my husband’s support were a major reason for that. 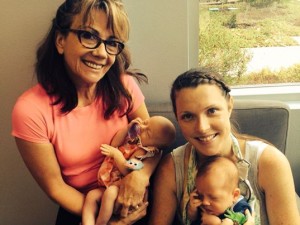