I Am A Warrior – Healing From Traumatic Birth 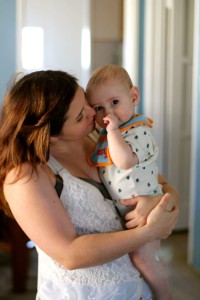 38 Weeks and a Dull Ache

My son’s birth story began 4 days before I actually gave birth. I remember waking up at 3am on Friday morning with a dull ache in my upper right abdomen. Being almost 38 weeks along I figured it was the baby in an uncomfortable position. So, I went through an array of positions I had learned in prenatal yoga but nothing helped.

Instinct Told Me Something Was Not Right

By 6am the pain had evolved into more of a sharp stabbing sensation. I felt like something wasn’t right so I called labor and delivery and was convinced by the nurse that in my first-time mom naivety it was simply the baby in my ribs even though instincts told me that something just wasn’t right. I was planning a natural labor and birth thought maybe this medical professional was right. If she was, I needed to deal with the pain. If I couldn’t handle the pain of the baby in my ribs, how on earth would I handle labor?

Pain Ebbed and Flowed for 4 Days

Over the next 4 days the pain ebbed and flowed. It would be excruciating and then be gone. I wasn’t sleeping because when it hurt it HURT! Whenever I ate, I would throw up! At my 38 week check-up, I spoke to my midwife about my pains. As she palpated the area , she felt a lump and told me the baby was probably just about to break my rib. I trusted her more than myself. I had no other symptoms pointing to HELLP syndrome. I wasn’t swollen, my blood pressure was beautiful, no bleeding, headaches, or blurry vision. My husband and I went home in a blissful state. The baby was low and I was already 80% effaced and 2 cm dilated.

Listening To My Body – Something is Wrong

That night, though, the bliss was gone. Around 9pm the pain returned with a vengeance. Imagine being stabbed with a rusty ice pick repeatedly and then multiply that by about 20 and you’re in the ball park. I took a warm bath, used a heating pad, ice packs, and spent about an hour bouncing on my birth ball. At 11 pm, I was in tears and woke up my husband. I needed to get to the hospital ASAP. We arrived in triage and they paid little attention to us, they thought I was just another pregnant woman in labor. I went through the admissions process all the while feeling like at any moment I was going to die. They finally got me into a triage room for monitoring before admission and found out I wasn’t even in labor. I was placed in the most uncomfortable position for what felt like hours of monitoring. I was writhing in pain. FINALLY they admitted me saying I had preeclampsia and planned to induce me. The nurses started talking about the induction process and no sooner had they finished when the anesthesiologist walked in. He whispered quite loudly to the nurse that they were axing the induction. “She needs a Cesarean. We’re prepping the OR right now. We need her back there ASAP.”

Words simply cannot express the absolute soul-crushing devastation I felt at that moment. I was immediately in tears, scared, confused, and overwhelmed. I spent 9 months preparing for my beautiful natural birth and in seconds it was ripped away. I remember my sweet husband asking “What’s changed, why can’t we induce her? Is she in danger or is the baby?” No one was answering his questions. We simply got “we need to get her back for a c-section.” I later realized that I was severely sick and the doctors didn’t know if I would make it. They weren’t avoiding the questions, they just didn’t know how to answer them. I had a severe case of HELLP syndrome and I was dying. If they didn’t get me back for the c-section my liver would rupture and my organs would start to fail.

The Room Was Silent

I was wheeled back to the OR all the while crying my heart out and apologizing to my beautiful unborn baby. I had promised him from day one I would never make him come a moment sooner than he was ready. Here I was at 38 weeks, forcing him from his warm home. They prepped me and began the procedure. The room was silent, no one was talking because they were all waiting for everything to be ok. I later read in my surgical report that they had anticipated me hemorrhaging massively. HELLP syndrome stands for Hemolysis, Elevated liver enzymes, and Lowered Platelets. In laymen’s terms, my liver was killing my red blood cells leaving me with almost no clotting factor.

They finally got to the baby and were attempting to pull him out, but he was stuck. I couldn’t help in that moment but feel so guilty. I promised this little being, he wouldn’t have to come if he wasn’t ready. He wasn’t ready. They pulled and pulled and finally they got him out. There wasn’t a cry….there still wasn’t a cry and then finally my baby breathed his first breath behind a curtain. They finally called my husband over and he announced in his proudest most vulnerable voice “It’s a boy!” I was a mama to a beautiful little boy. They brought him over but I couldn’t really touch him, I could only see him.

It took 2 hours for them to suture me and get me back to my baby. I was so out of it though that the nurse had to ask if I wanted to hold my own baby. I got this little bundle in my arms and thought to myself, “This can’t be my baby because I don’t feel a pull to him.” I wasn’t overcome with love and affection. I had a baby in my arms that for all I knew belonged to the woman in the room next to me. I didn’t feel like I had just had a baby, I felt like someone had died.

After 4 days we were allowed to go home. I felt empty and broken. I cried more than I smiled. I knew things were going to get worse and they did. I was failing at breastfeeding. My son wasn’t latching well and I cried every time I fed him because it hurt so badly. I kept on though. I didn’t want to fail again. After 4 months though I made the heart breaking decision to begin formula. I wasn’t producing enough milk. My body had failed me again. I was now in the throws of postpartum depression. I felt like a terrible mother, I felt like I wasn’t good enough for my baby. He deserved better. My thoughts got dark.

At 6 months postpartum I felt like I was emerging from the dark. I can’t say for sure what triggered it, but I knew in my heart something needed to change. I began researching how to become a doula. I felt like I had been dragged through this trauma in order to learn something. The more I researched doula work the more my heart sang. I had for once in my life found a career that touched my soul.

Working towards becoming a doula has healed my heart in way I didn’t think possible. It made me realize I didn’t have to live in this darkness forever. I didn’t need to remember my son’s birth and be bitter. I could be the mother I wanted to be. I wasn’t a failure. After speaking with a wonderful woman named Shelley after a class for doulas, I made an appointment to do a birth medicine meeting. I wanted to be fixed once and for all. The meeting didn’t fix me though, it made me realize I was never broken. Every step I take on my path of being a doula heals me a little bit more. I went through this experience, this heart-breaking trauma, so I could come out the other side and share my wisdom. I am a warrior just like every other woman, regardless of deviations from their birth plan and ultimately how their babies are brought into this world.