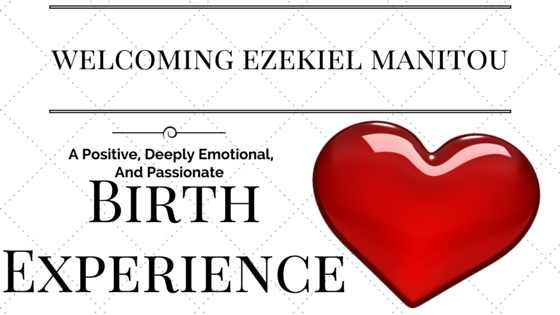 O Boy, I am not even sure where to start with my birth story!

It was our wish and plan to deliver at home with a wonderful team of midwives within the 42 week time period, which is the time limit that the state of CA puts on home births. That did not happen. On the one hand I feel my birth story is the classic example of how one medical intervention can spiral into the next due to the time limit western medicine puts on the gestation period. Yet, I also feel that my birth story was a positive one for me. I felt much more a part of the decision making process. I felt a deep and passionate connection to the birthing process. I loved how it connected Jesse and me more so than my first birth because of midwifery care and the education we had this time.

At week 39 I started to encourage natural induction.  Even though I visualized this baby coming on time, I knew from prior experience that I might be late.   I started with lots of walking.  Everyday I would walk the dogs 3 miles, and then Zoe (my 10 year old) and I would do daily outings. We visited the wild animal park, the zoo, the beach, the mall and more walking. I walked, and walked some more. I ate lots of pineapple, spicy food, dates (which I hate), raspberry leaf pills, evening primrose pills both orally and vaginally, some awkward sex, and 2 sessions of cranio-sacral therapy.  I even jumped on my daughter’s trampoline! 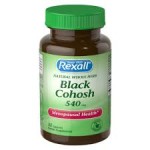 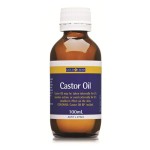 At 40 weeks I did 2 rounds of castor oil, nipple stimulation, a black and blue cohosh regimen, daily acupuncture, and my membranes would be swept at every midwife visit.  Throughout all these activities I would have some of the tell tales signs of early labor, losing some of my mucus plug, early morning diarrhea (without the castor oil), days of pretty heavy contractions. I thought, “This is it, here we go!”  But the contractions would fade away.

A Battle With The Clock 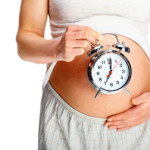 At 41 +3, I felt like I was starting to lose my battle with the clock.  I knew that at 42 weeks the midwife could no longer legally deliver my baby at home. I was starting to lose hope.  What an emotional rollercoaster!  I would have good days full of hope followed by days when I just wanted to throw in the towel.  At 41 weeks and 4 days I was 2cm dilated, 50 % effaced.  We decided to try the Foley catheter to mechanically widen the cervix to 4 cm dilation in an attempt to get the baby to drop and engage the cervix. Followed by another induction regimen. This regimen, recommended by another midwife, pulled out all the stops and was miserable!  It basically incorporated castor oil, nipple stimulation and black and blue Cohosh every 4 hours.    I felt my body had been put through the ringer.  I vomited up all the castor oil as soon as it hit my stomach.  (I will never ever use castor oil again for anything!) No contractions whatsoever!  The day before my last appointment with the doctor this time at 42 +1) we decided to drive up to Julian hoping elevation would stimulate things. Nope!

So Much For Natural Induction! Time To Get Serious! 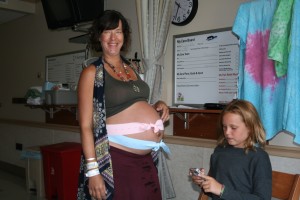 So on July 15 (42 + 3) at 9.30 AM, we went to the hospital with the midwives and our daughter to get induced with Pitocin. The Pitocin drip started with a low dosage and was upped by 2 every ½ hour.  By 1 PM I started to feel contractions. They became intense about 8pm.  The Pitocin drip was almost at maximum dosage.  Contractions were intense and 2-3 minutes apart. At midnight, the doctor decided to take me off the Pitocin to give me a break, and to see if contractions would continue.  They did but with lower intensity and 4-5 minutes apart.  No more Pitocin so we could get some sleep, except for Jesse and I, in 5 minute cycles.  At 5 AM, July 16, I was 6 cm dilated, but baby was still at -1 with a bulging amniotic sac.  At this point we decided to break the water in an attempt to get the baby to engage my cervix.  This is something the doctor wanted to do immediately the day before but we held her off in an effort to get more dilation first.  Breaking the water felt like such a relief and I was able to sleep a full hour before contractions started again on their own without Pitocin. Since I was not on the Pitocin anymore, I was finally off of the continuous fetal monitoring and was able to get into the shower to get some relief from the contractions. 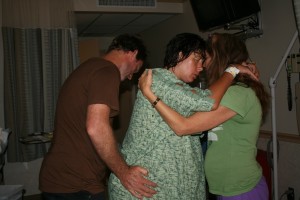 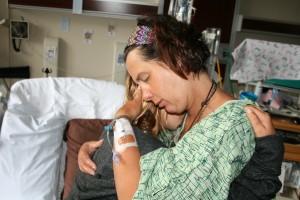 A Profound And Deeply Emotional Experience

On went another day of laboring. I do want to say at this point that the whole laboring process had been amazing.  Yes it was hard work! Yes it was painful and intense! But with loving and 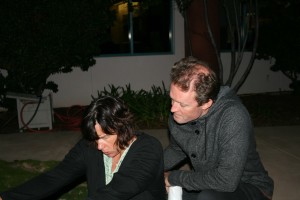 caring support of Jesse, the midwives, and my beautiful, caring and extremely mature 10 year old daughter, it was such a profound and deeply emotional experience.  I would not have traded it for the world.  The midwives were amazing.  They gave Jesse the support that he needed, took over care for me when he needed to rest and were there to give advice on how to deal with the hospital staff.   If it had not been for them I do not think we would have been able to hold off the hospital staff for that long.  I do not think I would have been able to labor for that long and have my laboring experience, which was deep and emotional. I needed that in order to feel good about this birth experience no matter the outcome. 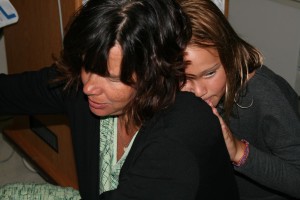 At the 30th hour of labor my contractions were extremely intense but not consistent enough for the doctor.   I was put back on the Pitocin. I also threw in the towel and opted for the epidural.  This was a really emotional breaking point for me.  I did not want to go there again, but after 30 hours with no rest and hardly any food (even though we snuck food into me whenever we could) I had had enough!  We asked to keep the epidural dosage low so that I would still feel each contraction but at about half the intensity.   Well, half the intensity kept getting more and more intense as the Pitocin was ramping up the contractions once more.  Laboring through each contraction became harder and harder to do plugged in to all the different monitors and not being able to get off the bed due to the epidural.    At the 36th hour, everything started happening really fast.  I developed a fever. I started vomiting. The doctor started talking about having to pull the baby out due to risk of infection. My cervix was checked again and I was only 7 cm dilated; baby was a station 0; still no sign of engagement.  One entire day of labor to get 1 more cm dilated.

I felt broken, delirious and utterly exhausted.  We finally decided for the C-section and at 12:20 AM 7/17/15, 2 days after induction began, Ezekiel Manitou Grossman was born at 9 lbs. and 22 inches.  He was a big, healthy boy.  Because of risk of infection to the baby, he was taken to the NICU.(neonatal intensive care unit) which was hard. Luckily, he was able to be with us for the first hour while we were in a recovery room.  I was able to hold him skin to skin.  Finally, we were up in our recovery room at 4 AM.  Ezekiel was in the NICU for a day and half, but I was able to feed him on demand and the last night in the hospital he was with us in the room.  This is in some ways the classic intervention birth story. But in so many other ways our birth story is such a positive, deeply emotional, and passionate experience, with a beautiful, healthy baby at the end of it.

And at the end that is all that matters. 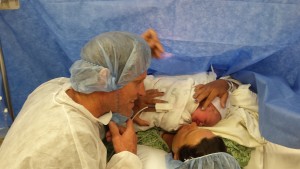 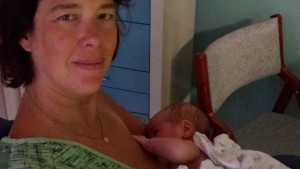