24 Hours of Labor And Our Little Boy Made His Debut 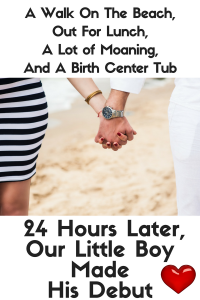 A Babies in Bloom Birth Story On 9/22, my actual due date, I got up to use the bathroom at 5 am and my bag of waters broke. I was really excited that our baby was on his way. But the first thing that came to mind was disappointment that I wouldn’t be able to labor in the tub. The risk of infection can increase if you get in the water too soon. I really had wanted to experience laboring in the tub. It sounded so relaxing and peaceful, and I had heard it is a lot less painful. The second thing that came to mind was concern since I had tested positive for Group Beta Strep (GBS). I now only had 18 hours to make good progress or deliver our baby at Babies in Bloom Birth Center , since risks of GBS infection to the baby is higher after 18 hours with the bag of waters broken before labor begins.

Our Baby Was On His Way!

Since I already had my 40th week prenatal appointment scheduled with the midwives that morning, I went in so they could see how baby and I were doing. They weren’t able to check my cervix for dilation because a risk of infection comes from cervical checks if your bag of waters is broken. I had originally planned to check any progress and changes in my cervix at that appointment, but contractions had started and were slowly progressing. So we had to be satisfied that my body was already working hard and our baby was on his way!

Since my bag of waters had broken I was pretty much “on the clock” to be able to give birth at the Babies in Bloom Birth Center. So Jamin,  my midwife, suggested I do an acupuncture session to get labor really moving. It definitely helped speed things up! I had a few more contractions during the session but as soon as we were done and we were walking to the car I could tell they were getting more intense and more frequent. Yes! The acupuncture worked. At this point contractions felt like bad menstrual cramps.
Ignore Your Labor – A Walk On The Beach and Out To Lunch

Afterwards Clay and I went for a walk on the beach (where I started to feel some contractions/tightening in my back) and then went out to lunch. We then went home, got everything ready and let labor progress. The worst part, once contractions were in full swing, was the back labor! Each contraction felt like it started in my cervix and then would radiate to my back. No position really offered any relief but I used the birthing ball to sit on the most so that Clay could be behind me and apply pressure and a heating pad for each contraction.

Breathing, Low Moaning, and Several Showers Got Me Through

With each contraction I remember focusing on my breathing and trying to make low moaning sounds. Since I couldn’t labor in the tub I took quite a few showers and that seemed to speed things up. When contractions were about 3-5 minutes apart I started to become more and more nervous for the car ride to the birth center. I knew riding in the car was not going to be any fun! So after talking to the midwives on the phone, we decided to get in the car and meet our midwives at Babies in Bloom. We ended up getting to the birth center a little after midnight and when we got there they checked my cervix and my cervix was 6 cm dilated. I also decided to take the antibiotic since it had been 18 hours since my water broke. 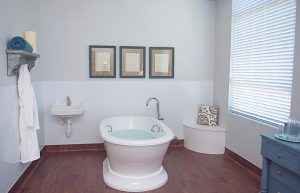 Gotta Get In That Tub!

After laboring for a few more hours, I was exhausted. I really needed to rest so I asked if I could labor in the tub. The midwives were a little hesitant because the tub can slow things down sometimes. But they said, ”Okay, get in the tub and rest a bit.”   I was so tired. I was falling asleep between contractions while I was in that big beautiful tub.  But my contractions were all over the place, timing wise. Clay was not able to wake me up before each one hit. Waking up to contractions is not a fun experience! I wouldn’t say the tub necessarily made the contractions less painful but being in the warm water was so much more soothing and relaxing to me, especially in between contractions. That was why I was actually able to sleep between contractions.

That Little Bit Of Sleep Helped Me To Get Focused

When the midwives, Jamin and La Shel, checked on me, Clay told them that my contractions were slowing down to 5-7 minutes apart so they only wanted me to stay in for 30 more minutes to rest. I did not want to get out of the tub or backtrack, so I woke myself back up and stayed alert. The contractions started to speed up and I was clearly making more progress. All of a sudden, I had the urge to push! So I got out of the tub so the midwives could check me and I was 10cm dilated! Luckily the tub didn’t actually slow down labor, but rather gave me the rest I needed and allowed me to fully dilate.

After 24 Hours and Several Pushing Positions, He Was Born!

I pushed for 30-45 minutes. I tried several positions for pushing: side lying, on my back, standing, supported squat hanging off my husband and a squat. The position that worked best for me was the side lying and supported squat but ultimately when he was born I was on my back. During pushing my contractions slowed way down but the little one finally made his debut just shortly after 24 hours of labor.

The Bradley Method® classes taught us so much and helped me understand what my body would be going through. Knowing and envisioning what my body was doing with each contraction really helped me get through the whole process. Clay learned so much as well and was a well prepared and amazing coach so thank you so much for everything!