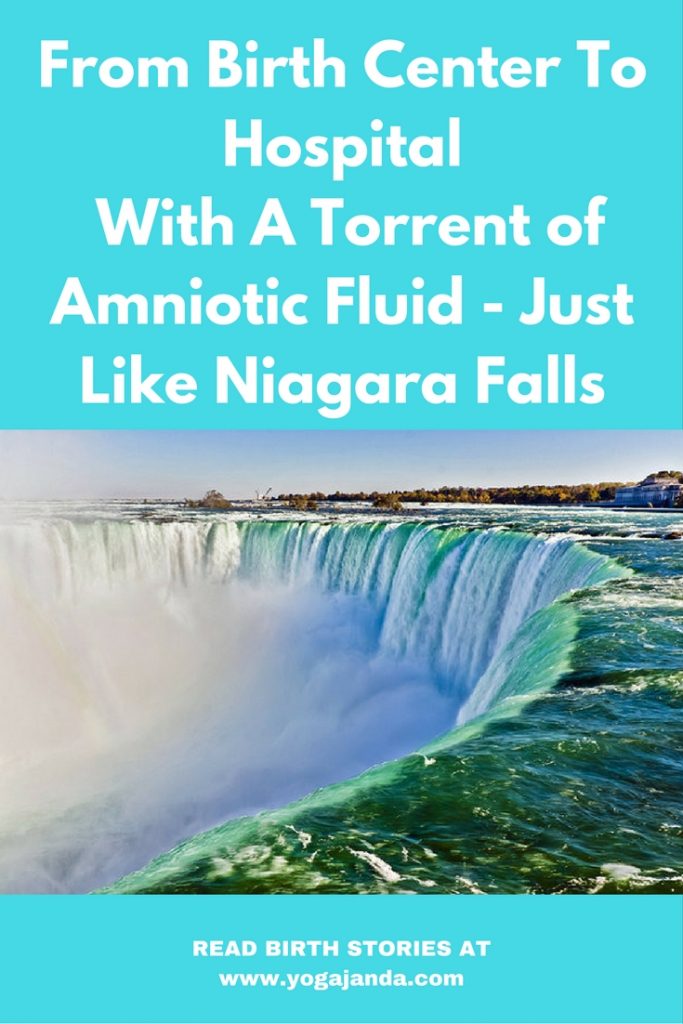 Labor started off at 11:45 Friday night with contractions about every 7 minutes. By 4:30am they’d made it to 3 minutes apart but not quite strong enough to head to the birth center. Our midwife told us to press on and we did. I labored all over our apartment and the time went surprisingly fast. Eventually we left for the birth center at 2pm. The drive there was definitely terrible with my contractions. When we got to the birth center I was already 7cm and definitely laboring hard in Active Labor. However, the team found my blood pressure to be in the 150s and even as high as 170/90. With blood pressure this high, I was no longer low risk. So,the midwife began making the arrangements to transfer to the hospital to check for preeclampsia.

A Torrent Of Amniotic Fluid!

We had our choice of hospital and chose to go to Camp Pendleton. While we were waiting to leave, my water broke. The amniotic fluid was pouring out of me like Niagara Falls . I had to wear a make shift “diaper fortress” to stem the tide! The drive to Camp Pendleton was AWFUL. Crazy contractions took over my body as I headed into both Transition, and into the hospital. I was “that” shouting, moaning, pregnant lady, in labor, coming through the gate. Our family friend wheeled me into the hospital as I bent over the back of the wheel chair leaning on a pillow. I’m pretty sure my “diaper fortress” was bare to the whole world. #noshame It’s a good thing that one of the emotional signs of transition is lack of self-consciousness. I don’t know how much of me was bared to the world – which is a good thing – because my eyes were closed the whole time!

Once we got in the room, there were probably more than half a dozen people in and out of the room. Checking my BP every minute. It was in the 180s at one point and I think the fervent prayers of our friends brought it down or we would’ve been sent for a C-section. They started an IV, gave me Magnesium to lower my BP, and set up external fetal monitoring for baby. My midwife team stayed with us, which was such a blessing. There were so many people poking at me and distracting me and I really needed help to focus through my contractions. I was at 8cm at the hospital when we got there at 5pm.

Protein In The Urine – Preeclampsia

After probably an hour or longer they confirmed protein in the urine and preeclampsia. I continued to labor for quite a while and tried to convince my husband I needed pain relief. He definitely went back to everything we learned in our Bradley Method class and tried to encourage me to keep going because we were so close to second stage and pushing. After about 19 hours of labor with no relief, I elected to use nitrous oxide as pain relief during my contractions. WHICH WAS GREAT. It just helped me to relax because I was sooo uncomfortable in the hospital room. I had the urge to push and was so ready to start pushing, but I wasn’t dilated enough yet!

The Gates Of Heaven Opened (Cue The Angels Singing!)

Unfortunately by about 8pm labor had slowed down due to the Magnesium and the other blood pressure medication administered. My midwife team helped us talk through the decision to have an epidural and Pitocin. Our goal was to still have a vaginal birth. The epidural me relax, and would help baby drop a little further and get through that last stretch. So the epidural was administered around 10pm. Then a Pitocin drip was added to augment my contractions and make them more effective. Epidural contractions were like nothing compared to what I’d felt up to that point. The Pitocin helped get our contractions to 2-3mins apart but eventually they tapered off while I sat at 9cm. Fortunately, we avoided having internal monitoring done although it was discussed. I continued until about 3am when finally the gates of heaven opened and we hit 10cms! We did some practice pushes and got started. It sucked being on my back and having my pushing directed instead of the physiologic pushing we had practiced in Bradley class. I was restricted, not only by the monitor, but I also had a Foley catheter up to that point. My movement was very limited. They moved me from side to side but it definitely was no easy feat. Although I’d had the epidural earlier, the delivery was definitely still extremely intense!! WHEW. I pushed for about 45mins and delivered at 3:54am. Joy Evanell was born on 09/04/16 at 3:54am. She was a very healthy 9 pounds 1oz 21inches

Even though the birth was far from what we envisioned, I’m so glad we had all the knowledge from our Bradley Method class! It made everything being thrown at us much easier to understand and to make decisions. And thank God we had our birth plan! Our OB said, “It’s hard to avoid a laminated and highlighted birth plan, Mrs. Crespin.”