WE HAD A LOT OF FEARS ABOUT MY VBAC ATTEMPT 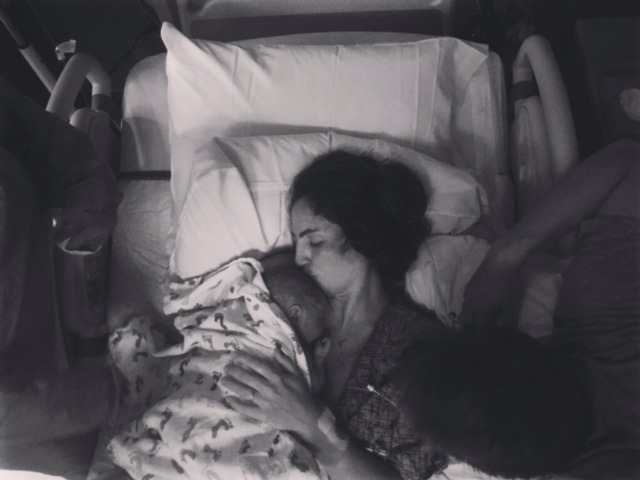 We had a lot of fears that I wasn’t going to go into labor naturally and that would interfere with my VBAC attempt. We also feared that baby was going to be really late in coming. Because our goal was to have a VBAC, those fears escalated. We had twin girls the first time around and needed a Cesarean birth. So I was determined to have a natural birth and a VBAC. So Thursday night we had made a schedule and appointments for as many natural labor inductions. We were going to try them all over the next week since I was approaching 40 weeks. But then, Friday morning January 27th, I went into labor. We tried timing contractions all day because we thought that was going to help up but it ended up confusing us most of the day. My labor was all about trusting how I was feeling, what my body wanted to do, my coach’s guidance and the emotional signposts.

Is This The “Real Deal?”

Tried To Ignore My Labor

Remembering what I had been taught in my Bradley Method class, I told myself I had to go back to bed, ignore it, and get some rest. But every time I lay down, I couldn’t fall asleep because I would have another contraction. It was uncomfortable to be lying down during a contraction. So I got up and by 3am I had made myself comfortable with different positions. Leaning, sitting, and using the birth ball helped. Standing in the bathroom with the heater on helped me to stay warm and more relaxed. It was less than 50 degrees in our house and shivering in the cold made the contractions worse. At 3:30am I lay down to rest and try to sleep. I’d been working hard coping with these early labor contractions but I was tired already. So, finally I told Brandon I was in labor because I couldn’t sleep or stay put. Not knowing I’d been up for hours already, he responded that I needed to lie down and try to sleep (which was funny to talk about later).

We Thought This Would Be Fast – But Not So Much!

From 4-6am my contractions were 1 min apart and lasting 30 seconds. We thought this meant that labor was going to be quick so we called my parents to come get the kids and called my sister and doula to come over since we thought we would be leaving for the hospital soon. But we kept saying just 30 more minutes and we will see how we feel. We were still focused on our goal of a VBAC. There was a lot of walking around and “dancing with Brandon”. I wasn’t hungry but tried to eat eggs and toast throughout the morning.

Many Naps, Many Positions

I really started to get in the zone because I didn’t want to chat in between contractions like we had been doing all day. Finally at 6pm Brandon saw that I was changing emotionally and recommended that we leave for hospital. He had been very intuitive all day with what to try next so we packed up and with my blindfold on we drove to the hospital.

“What’s Going On In There?”

I had to pee on the way down so we stopped at Denny’s and I walked through the aisles as though people weren’t eating dinner watching me. I had a contraction in the bathroom and faintly heard a little girl in the stall next to me ask her mom “what’s going on in there?” When I got out she looked at me horrified- I think I traumatized that little girl! We arrived at the hospital around 7pm and as Brandon checked us in I continued to labor, ignoring everything going on around me. I could hear the nurses saying they needed to get me back because I was really in labor!

We were admitted and hooked up to the monitors, they were so helpful knowing we wanted a natural labor to let me stand and keep moving while being monitored and I was checked at 730pm and was 6cm dilated. At first I was bummed, hoping to be further along, but since I was in Active Labor already it didn’t discourage me. We were moved to L&D by 830pm and were given the best nurses to be with us and help us the rest of the night. They were supportive of a natural labor for my VBAC with the best balance of telling me what I needed and giving me space to make decisions. I asked if I could shower before they hooked me back up because I knew I had to be monitored the whole time because of my previous Cesarean.

Had To Lie Down For The Baby

They told me after they got a read on the baby they would give me a break, which didn’t end up happening. We found out the baby’s heart rate had started dropping during contractions when I was standing and sitting. When the nurse told me she needed me to lie down I refused because all day it was a lot more painful and uncomfortable in that position- so she asked if I would try just to see if it helped the baby and if not I could get back up. With a lot of hesitation I lay down on my left side and it ended up being great for me and the baby, and I didn’t move again until I pushed.

Urge To Push Too Soon

When they checked me again around 830pm I was 7cm dilated. By 9pm I was 8cm and the urge to push started- this was something I didn’t understand and having to resist the urge for an hour and a half was very hard. My nurses were so helpful and supportive during this time coaching me to breathe properly as though I’m “blowing out a candle” and continually encouraging me.

I started sleeping in between every contraction and a few times waking up surprised I was still in labor. Brandon sat next to the bed and held my hand the whole time. He tried to let go once and I told him not to leave because I really needed him. During this time my sister was always there to support me and, without my knowledge, would position herself at the bottom of the bed with hands ready to catch just in case the baby came flying out. She said she didn’t realize what she was doing but just kept doing it. After doing this for a little I felt like I couldn’t do it anymore, I was tired and my body felt worn out and I didn’t feel like it would ever end (a classic sign of transition). I looked up and told Brandon that. He responded by telling me I was almost done, which was all I needed to hear, so I lay back down and kept going.

My water broke during a contraction with a large gush, which felt relieving at the moment but made the last part a little more intense. The nurses were doing a lot around me but I wasn’t aware of any of it until 10:30pm when the doctor came in and I was checked and given the okay the push. The doctor asked me to turn onto my back. I wasn’t comfortable with that so Brandon grabbed both my legs and I held his arm for the first 2 rounds of pushes. My team was trying to guide me through but I could only really hear Brandon coach me so I stayed focused on his voice. The doctor asked if I wanted to feel his head when he was crowing and I tried but quickly realized I was losing focus so I couldn’t really feel.

Positivity Really Helped – I was able to finally hold him.

A few random memories from friends telling me about pushing came into my mind and helped – like pushing just past the ring of fire to keep him coming out more. And the whole team was so encouraging letting me know I was making progress and doing great even though I didn’t know what that meant- the positivity helped me. After the second contraction I needed to move so I rolled onto my back for the second 2 rounds of pushing and at 10:57pm Cooper was born and placed right onto my chest. The feeling was freeing and he was so beautiful – all I felt was awe! Crying and laughing in pure bliss I was able to finally hold him. With hard work, support, and perseverance, I got my VBAC and a healthy baby boy.