Fully Prepared To Embark On Our Natural Childbirth Journey 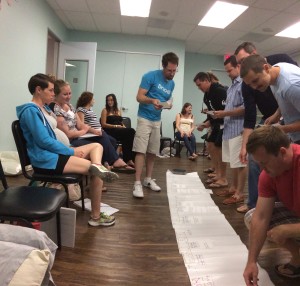 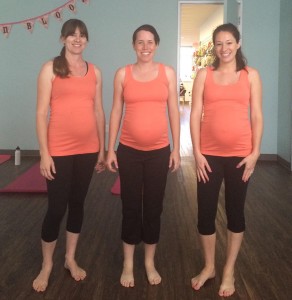 Radley’s due date was 8/7/15. Although I had told myself throughout my pregnancy that it was likely he would be late, I was getting anxious to meet our little bundle of joy as his date was approaching. After 8 weeks of Bradley Method classes with Liza Janda, Zack and I felt prepared to embark on our journey of a natural child birth. We had also recently switched to a new OB, Dr. Cap, just two weeks prior… he was supportive and encouraging of our birth plan and we were confident that he would do everything he could to help us achieve a natural birth.

Throughout my pregnancy I stayed active and kept up on my exercise: swimming, practicing yoga and frequenting the gym on a regular basis. I had been advised that approaching the due date, walking and doing stairs may help to kick start labor. Having maintained an active pregnancy, I was a bit skeptical that this would be the trigger but thought as I neared my date that it wouldn’t hurt to add more of this movement to my routine. Zack and I started walking more the week prior to my due date and I noticed that it would often trigger some Braxton Hicks contractions… Maybe the experts were onto something.

Thursday afternoon, 8/6, I was getting a bit stir crazy as I had been working from home all week and needed to get out of the house. I called up my sister in law, Mariah, and asked if she wanted walk around Discovery Lake with me. She headed right over and we walked around and around the loop for a little over 3.5 miles. As usual I had some little contractions throughout our walk but figured they were just more Braxton Hicks in preparation for the big event. It sure felt good to get out and move. I invited Mariah to stay for dinner with Zack and I and made one of our house favorites, BBQ Chicken Salads. Sitting at dinner I felt a pretty strong contraction, definitely one of the stronger ones I had felt but there was only one. We wound down the evening and headed off to bed looking forward to tomorrow as we would reach the milestone of Baby Benson’s due date and it was my last day of work, yay!

At 1:00 in the morning, 8/7, I woke up thinking my water was breaking. I felt a couple gushes of fluid coming out of me and on the third one I was awake enough to think I should hop out of bed and head to the bathroom. I was wearing a light day pad and it was completely soaked. The liquid was light yellow and from what I understood, amniotic fluid is clear. It didn’t smell like urine but I wasn’t continuing to leak so I thought maybe this was just some mucous. I mentioned it to Zack as he woke up when I crawled back into bed but we figured we shouldn’t get too excited and ought to just go back to sleep. Shortly after heading back to bed I had a strong cramping contraction that was pretty intense and it definitely lasted longer than the previous Braxton Hicks contractions I had experienced. Again, not wanting to get too excited, I thought to myself I need to just get back to sleep. Between 1:00 and 2:00 I had 3 of these contractions and at 2:00 told Zack that I didn’t think I could get back to sleep.

Zack decided to time the contractions and between 2:00 and 2:30 I had 3 of them at almost exactly 10 minutes apart, lasting about 1.5 minutes each. At this point I was out of bed trying to find a more comfortable position for managing the contractions. On my knees I befriended my exercise ball with arms wrapped wide around it rocking back and forth as the contractions passed. Zack would stand behind me with our rebozo rubbing it back and forth across my hips to relieve some of the pressure through each contraction. At about 2:30 the contractions took a quick jump ahead to about 4 minutes apart, according to my wonderful coach, Zack, who was diligently keeping track. I remember telling him as they sped up that I was having after shocks as I didn’t think they should be so close so quickly. I figured these were just little ones in between, although they certainly didn’t feel little when they hit. I was becoming very vocal “whooing and haaing” as the contractions passed. After a couple contractions at 4 minutes apart, they jumped to about 2 minutes apart. Zack decide to call Mariah as she wanted to be notified as soon as we knew we were in labor so she could be at the house with us to help with anything she could. He also called my sister so she could alert the family in AZ that the baby was on the way.

After a few contractions at 2 minutes apart, Zack decided to call Dr. Cap. Dr. Cap said it was unlikely that labor would progress that quickly, especially for a first time mom, and encouraged Zack to get me into a bath as that may possibly slow things down. Comfortable with my ball, it took some convincing for me to move to a different position. Thinking I would like the tub, I agreed to make the move. On the way I insisted on using the restroom and realized I had started bleeding. Seemed like the bloody show I had heard about but I didn’t know how much blood to expect… Zack called Dr Cap again to let him know about the bleeding and he assured us that this was all normal. That said, if we would feel more comfortable laboring at the hospital, he encouraged us to go ahead and make our way there. Since we intended to spend most of our time laboring at home, I took to the tub in hopes that it would provide a bit of relief. Intensity continued to gain and I became more vocal, continuing the “whoos and haas” as each contraction passed. Maintaining the pace of about 2 minutes apart, if that, and lasting about 1.5 minutes long, Zack suggested that maybe we make our way to the hospital around 3:30. Considering I could barely talk or walk I thought we were probably safe to head there and get a room. I just hoped that I would be dilated enough to be admitted when we got there. I didn’t want to be one of those first time moms that got to the hospital too early. After slowly exiting the bath and getting through the immense task of dressing, with Zack’s help and guidance, we got in the car at about 4:00 and headed off to the hospital. Mariah followed us in her car and called the hospital to let them know we were on our way. So much for baking the cookie dough I had in the freezer for the nurses and the cupcakes to celebrate Baby Benson’s first birthday. You know the song “if I knew you were comin’ I’d have baked a cake. J”

The car ride was not comfortable, sitting was about the last position I wanted to be in. As the contractions got more and more intense I did everything I could to focus on my breathing and continued through my chanting vocalizations. Zack chanted with me and I found it comforting that he was part of my vocalization. As my pitch got higher, he got louder and lowered his pitch which helped encourage me to relax. I was very grateful that there was no traffic and was quite thankful for each green light crossed. Windows down, the cool early morning air was very refreshing. Continuing our chanting as we pulled up to a light, the guy in his car next to us probably wondered what the heck was going on as we were quite the duo with the sounds we were making.

Before heading up to recovery, George and another nurse encouraged me to use the restroom. Considering my bladder felt quite full, I graciously accepted their help to get to the bathroom. I slowly got up from the bed as they advised me to take it easy since I had just lost a lot of blood. On the toilet, they closed the door to give me some privacy but advised that they were right outside if I started feeling dizzy or light headed. George kept talking to me and asking how I was feeling when suddenly I informed him that I was feeling a bit queasy and light headed. He came right in and caught me as I was passing out and falling off the toilet seat. So glad George was on it or I would have been on the floor! Honestly, I didn’t realize I had completely passed out until Zack was telling the story when we were up in recovery. Looking back, I recall coming to as they were putting me in a wheelchair. They were talking to me but I couldn’t hear what they were saying for a few seconds and then all of the sudden I came back to consciousness. Once we had all shaken off this incident, George took us up to our room for recovery.

In our recovery room Zack and I enjoyed some time alone bonding with Radley before we had any visitors join us. What an absolutely incredible, life changing experience. I’m so very lucky to have had the encouraging and positive energy from Zack throughout my labor, he was such a big part of keeping me relaxed and focused. You just never know what you are going to get with a child birth. We were prepared for the marathon labor and all and all it was about 4 hours from start to finish, I would certainly say more of a sprint. We feel truly blessed to have had such a great laboring experience with a healthy mama and baby.