Recipe For A Fast Natural Birth 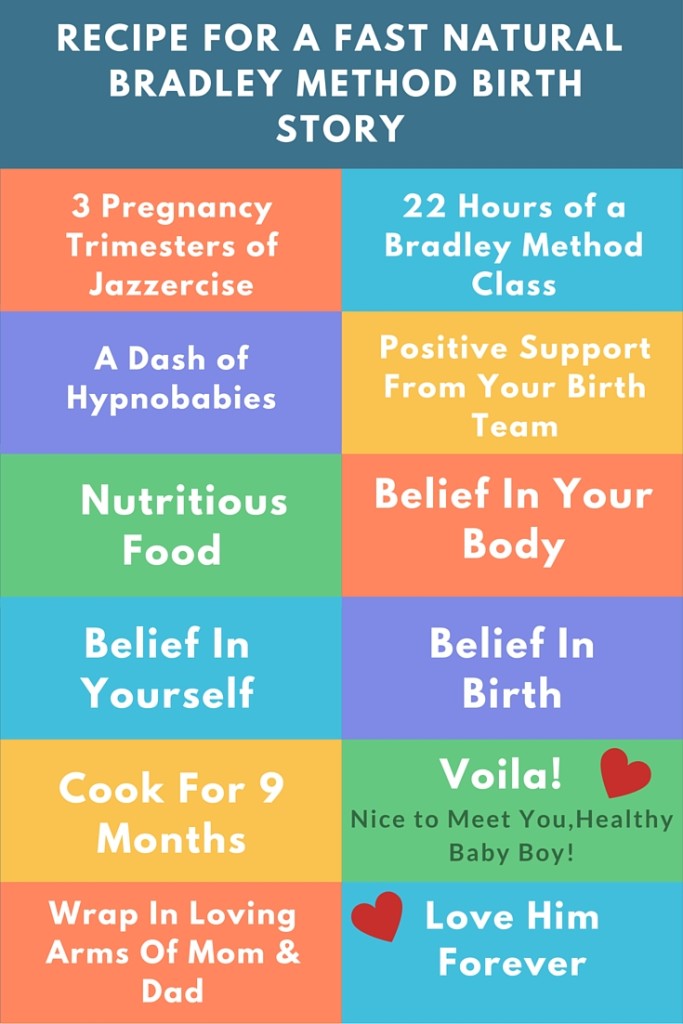 Cohen James was born at 10:38pm on February 4th (two days after his due date).I started having contractions in the afternoons for a few days prior, but they were very mild and always stopped when I went to bed. On the 4th, I woke up at 3am with mild contractions, but this time they kept me awake. Around 9am I decided to go to a class (Jazzercise) in an attempt to keep things going. I was pretty sure this was different than the days before, but I didn’t want to get too excited.

After class I came home and we decided Ryan should stay home from work. We just hung out and watched TV, ate lunch, and did some work through contractions sitting on a birthing ball. Things were very calm.

About 2pm the contractions became more uncomfortable. The ease of conversation changed, I started lying down with a heat pad, and I eventually made my way to the shower, laboring at home for several hours. Ryan says he knew around 4pm that this was real and started packing up the car, timing contractions, and checking traffic. He decided it was time to leave when I told him I didn’t think I could do this, and told him I couldn’t leave the house. He finally convinced me to get dressed, and we left at 6:15pm to drive up to the Kaiser Hospital in Irvine.

We arrived at 7:00 – inconveniently close to change of shift and got checked-in and brought to a room. They assigned us a nurse and midwife who were AMAZING and very supportive of our desire to have a med-free birth. I declined to have an IV, and the midwife told me right when she came in to meet us that she would not break my water, and was happy to go with our plan as long as everything was safe for me and the baby. I’m not sure if it was right when we met or later, but the midwife told me “This is your birth – we will do what you want as long as you and the baby are safe, but I will tell you that I’ve had 3 natural births myself, and you CAN do this.” It was so reassuring to hear that not only did she respect our plan, but had lived it herself.

I was at 5-6cm when she checked me, and I was (very) worried that wasn’t far enough along, but everyone reassured me that I could do this. Ryan was a constant support. I realized the next day that it was probably an hour and a half before I even saw what my nurse looked like because I labored on my hands and knees, and then moved into the shower once they got 20 minutes of monitoring done. My contractions were extremely painful with back labor, and close together, 1.5 minutes long with 1.5 minutes between contractions from 4pm onward. I felt like I wasn’t getting any break in between, and seriously doubted myself several times. Ryan continued to reassure me. Our nurse constantly reminded me that I was doing it and making progress. At one point she took out lotion and gave me a back massage – I can’t say enough how wonderful she was. When I moved into the shower she asked if I had heard of hypno babies, which I had but never really looked into it.  She started playing a few videos on her cellphone and left it for me to listen to in the shower. At first I wasn’t really paying much attention, but then I started to follow the instructions – breathing in, counting back from 10… I’m not even sure I know what it was saying, but following the directions really allowed me to focus and block out everything else that was happening.

While in the shower, my water broke with a loud pop – super shocking and scary. It was very obvious there was meconium and I worried that this would negatively affect how we would be able to proceed. Ryan and the nurse said it was fine, and the nurse told me this was good news as it meant things were progressing. She also let me know that this would intensify contractions and after a little while they got me out of the shower and brought back to the bed to get another 20-minute strip of monitoring.  By this point, I was fully following the hypno babies meditations and had figured out that I could get through the contractions by breathing in and out slowly 4 times, and was almost falling asleep between contractions – it was such an effective way to deal with the relaxation I needed to keep going.

After a while, the midwife came in and told me that the NICU team would be present for the delivery and if the baby didn’t cry, they would have to cut the cord right away and take it to make sure everything was ok – because of the meconium.

At about 10:15p I told the nurse I was feeling a much more intense pressure and felt like I needed to push. She brought the midwife back and I began pushing during contractions and then resting between. I got almost goofy feeling so excited that this was almost over and we would finally get to see our baby – I said “someone just tell me if it’s a boy or a girl” and everyone was sort of shocked and laughing and told me we were about to find out.  The baby started having decelerations (heart rate) and the midwife told us she would need to do an episiotomy. Ryan hesitated and wanted to talk to me, but by this point I felt like I could trust her and knew she wasn’t just trying to speed us along, or anything like that. She was concerned for the baby and I said basically do whatever you need to do. I think there were two more pushes and they pulled out a baby boy – he screamed his head off – and she placed him directly on my stomach/chest.  It was such a rush.  I felt relaxed and relieved and my body felt really amazing.  I actually said “I feel AMAZING” and the Midwife sort of laughed and said “That’s what happens when you have a med-free birth!” After a few minutes, Ryan cut Cohen’s umbilical cord and he stayed on me (skin to skin) for almost 2 straight hours while we reveled in him being with us, and then eventually (after about an hour and 15 minutes) we brought our families in to meet him. I breastfed and spent time excitedly sharing with both sets of our parents before the nurses ever took Cohen to the warmer to weigh and measure and all of those things.

I feel SO grateful for the support we received and the amazing team that was with us at the hospital.  We know we are very lucky that things went almost entirely the way we hoped, and though it was probably the hardest thing I’ve ever done, I am so glad we were able to go into the birth ready and mentally prepared. 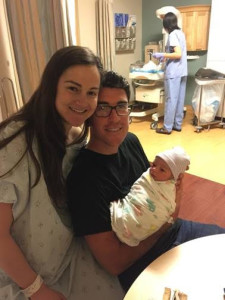 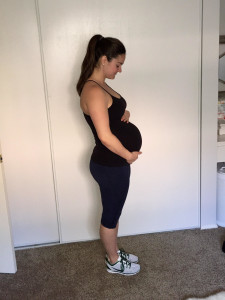 Recipe For A Fast Natural Birth Claire, Ryan, and Cohen