She entered the World with a Bang and a Pop! 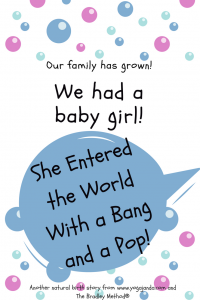 Here is another positive birth story. This expecting couple took the Bradley Method of Natural Childbirth class to prepare for the safest and healthiest birth story possible.

She entered the world with a bang and a pop

We happily celebrated Charlie Jean daCosta’s birth day on December 29th, 2017. She arrived exactly two weeks past her due date. She entered the world with a bang and a pop, weighing in at 6lbs 13oz and 19 ½ inches long, a healthy beautiful girl.

Months before she arrived we had a few medical issues during the pregnancy from surgery I had as an infant. I’d never had any real issues resulting from the surgery but as the pregnancy progressed I experienced some intense stomach aches.

A Hospital Stay at 23 Weeks

At 23 weeks pregnant stomach pain became unbearable and I was admitted to the hospital for over a week trying to avoid surgery.  Things cleared up without surgery and I was able to go home unaffected. Throughout the pregnancy, the baby and I remained strong and healthy.

Committed to an Un-medicated Birth

I knew I wanted to have a natural, un-medicated birth to ensure the safest, healthiest birth for me and our baby girl. After the hospitalization Chris and I were even more committed to this plan. We signed up for Bradley Method classes to learn how to create the birth story we wanted. So, every Tuesday night Chris, my sister, Auntie Audra, and I went to class.

When December arrived we were nearly done with our Bradley Method birth classes and felt confident with our birth goals. My mom, Grandma Mimzy, arrived from Missouri to help with last minute preparations excited to meet her new grandbaby. However, Charlie wasn’t ready until a full two weeks after her EDD!

I Tried All The Tips To Get Labor Going!

The final two weeks of pregnancy were a challenge for both of us. We tried to be patient, yet still attempted all of the tips to encourage labor to start on its own. I did not want a medical induction.

The Midwives and Doctors were far less patient with Charlie and me adding to the already stressful waiting period. On and off for the last two weeks of pregnancy I had intermittent contractions but they always faded away. My body and baby just weren’t ready. We had to have a non-stress test on Christmas day at the hospital.  I was only 1cm dilated and 50% effaced and Charlie remained in the same perfect spot in my belly. The midwives tried to get us to stay and be induced which was exactly what we did not want.

Labor and Delivery (L&D) meant increased monitoring, being strapped into a bed, and lots of medication. We allowed let them monitor Charlie all morning to get evidence that our baby was strong and healthy and even had a “contraction stress test” with a very light dose of Pitocin to prove that Charlie could handle the contractions! She was a champ. Finally, we got the okay to go home to wait for labor to begin on its own!

On Thursday the 28th, we had to have another non-stress test. Once again were offered induction. Friday would be exactly 42 weeks and we had to agree to an induction Friday night if labor didn’t start. I went straight to acupuncture again then went home and took Castor Oil for the third time! Yuck!

With no signs of labor and an exhausting few weeks of stress, stress tests, and pressure to induce I went to bed early. While lying in bed at 9pm I was having a few contractions and figured, like the rest, they would just fade away. But the contractions became stronger and closer together. After 30 minutes of timing them at 3 minutes apart and 1 minute long I decided to let Chris know and then tried to lie back down.

We had to get to work because labor was FINALLY starting!

I labored in the bedroom for a while, then in the shower for a couple of hours, until the water ran cold. I’d been laboring for 3 hours with contractions 3 minutes apart and 1 minute long. It was time to head to the Birth Center at UCSD. We notified our midwives, and my sister and mom and headed south after midnight.

Pain Meds or The Tub?

We arrived and I was dilated to 3-4cm and 100% effaced. By the time I was 6cm dilated I was so tired. The midwife offered pain medication or the tub. Thankfully Chris encouraged me to get into the tub. This turned out to be the secret weapon at the Birth Center nearly removing all pain. This was the ticket getting us closer to an un-medicated birth.

I stayed in the tub for about 5 hours! The nurses were so great they checked on Charlie’s heartbeat when needed even if they had to do so under water! We continued to labor with our “Dream Team”, as the nurse dubbed my husband, sister, and mom.

Chris was my rock especially in transition. I felt a strong urge to push at 8cm and had to concentrate really hard not to push. Now, that was hard!  Finally, the Midwife was unsure if I was at about 9cm or 10cm, so she told me to listen to my body and just do what it told me. I began to push in the tub but then the Midwife asked me to move to the bed and continue pushing. I’d been in active labor for about 12 hours and hadn’t slept in more than 24 hours. I was so very tired and lied down on my left side. Chris sat in front and held my hand encouraging me to curl around the baby and push while my sister held up my leg.

A Pop and A Gush!

Soon things really got moving and within a few pushes, an audible “POP” was heard and a visible gush of water burst out. My bag of waters was finally broken! Everyone was very surprised and then the intensity really peaked for me with every contraction.

I pushed for a little over an hour and twenty minutes total, thankfully with the help of my three wonderful coaches supporting, encouraging, and cheering me on to help bring Charlie into the world. Praise and encouragement were given excitedly when everyone could see a dark little head of hair starting to really come out!

So, after 42 weeks, and 13 hours of labor we all happily welcomed a beautiful, healthy, baby girl on December 29th, 2017 at 9:59am. Chris got to catch her and put her on my chest. My exhaustion flew out the window and suddenly I had so much energy. I breastfed my wide-awake Charlie with Chris right next to us in bed. Chris broke into tears of joy watching his love give birth to his baby girl.  After nearly an hour of skin to skin with Mama she happily spent another hour or so wide awake and skin to skin with Daddy. We went home the next day, all happy and healthy and doing well.