A Dramatic Debut For Our Little Jolie

The day before my due date I went to my very first acupuncture appointment to help stimulate labor. I called before going in and told him that my midwives suggested acupuncture to stimulate labor. On the phone, he explained to me how the acupuncture points in the body will help kick start labor if my body is ready. Since it was my first time ever getting acupuncture done, I was a bit nervous and I told him that as well. He reassured me that everything was going to be okay and as long as I relax my body, and breathe in and out while the needle goes in it won’t hurt. He wasn’t lying! It didn’t hurt at all! He also said, “Besides, this won’t hurt as bad as being in labor will!” Ha Ha.

I ultimately had two acupuncture sessions to help stimulate labor. The first time it really wasn’t as relaxing as I’d been told, but the second time (after my bag of waters broke) really helped me to be less tense and anxious. Maybe the first time I was overthinking it because I didn’t know what to expect. But at my second acupuncture appointment, I was actually able to go into a deep sleep. During my first acupuncture appointment, my baby in my belly, Jolie, was so active. She was moving and shifting inside my belly the whole time I was there. During the second appointment, she was just as relaxed as her mommy. Looking back, I guess she was gathering up all her energy for labor.

I’m pretty sure those two acupuncture sessions kick-started my labor since nothing else I had tried seemed to work. The morning after the first acupuncture treatment, at 6:35 am, my bag of waters broke with a great big gush. I was actually still asleep when my bag of waters broke. What a surprise to wake up to it gushing out! I tried to make it to the toilet so it wouldn’t be so messy but it was impossible! The more I moved, the more it came out. My pajama pants were drenched!

Soon after my water broke I finally started feeling some contractions. I hardly ever felt any contractions before my bag of waters broke. They weren’t consistent or strong so, I decided not to time them. I learned in my refresher childbirth class that it’s best to ignore labor in the beginning. Eventually contractions will be strong and consistent and I won’t be able to ignore them. That’s when it’s good to begin timing them. So, since I was soaked and covered with amniotic fluid, I jumped in the shower. The contractions after my bag of waters broke were pretty mild – not painful at all. They were just little baby contractions, just barely revving up, getting ready for the “real deal”. I was happy to finally feel some contractions and to know labor was really happening.

CONTRACTIONS WITH NO PAIN

That morning at 10:45 am I had my last appointment with my midwives so I decided there was no need to call them about my water breaking. Instead I could tell them in person, so they could give me the breakdown on what I should expect. I had also tested positive for GBS (Group Beta Streptococcus), so there was some birth center protocol I needed to know about – getting antibiotics, etc. After my shower I went down to cook my breakfast and get dressed for my appointment with the midwives. Contractions didn’t hurt at all but they were intensifying slowly.

My husband drove me to see my midwives. Our son was also with us the whole day. This was when my midwives, Jamin and La Shel, suggested I get another treatment of acupuncture to help stimulate my labor since I had a time limit at the birth center, Babies in Bloom. Also, antibiotics needed to be in my system by the 12th hour mark. After my appointment, I went straight to the acupuncturist so he could work his magic. Little did I know how effective acupuncture would be! While I was there for an hour and a half, I fell into a deep sleep but I only had 3 contractions the whole time. I thought, “Oh crap! It slowed things down.”

LET’S GET THIS SHOW ON THE ROAD!

This really worried me. Was this labor going to get going soon enough for me to give birth at Babies in Bloom? To keep ignoring labor, my husband, son, and I went out for lunch. We needed to relax, eat, and pass the time. Well, once I got some food in me, my body decided to “get this show on the road” and contractions began getting more intense. I didn’t want to think about labor too much, and dwell on how many contractions I was getting, so I just went about my day, ignoring labor as long as I could. In retrospect, maybe I should have paid more attention!

I decided to take a nap since I had hardly slept the night before. I tried napping but my contractions weren’t allowing me to sleep. Around 3:30 pm, a contraction happened that was so intense, it took me by surprise! I started getting hot one minute then cold the next. I realize now I was already in transition, also known as “Hard Labor”. Once that intense contraction happened, I decided to jump in the shower to help me relax through my contractions. Instead of jumping in the shower I should have left for the birth center!

CAN’T TALK. CAN’T GET OUT OF THE SHOWER.
TIME TO GO!

It was impossible to get out of the shower since my contractions were seriously back-to-back by then. It was pretty darn hard to communicate with my husband at that point. I had no time or energy to be able to talk or explain anything. With that one surprisingly intense contraction, I was trying to concentrate on my breathing and it was impossible to talk through the contractions. In the shower, I decided to get onto my hands and knees, because it was extremely uncomfortable for me to keep standing up. My son was up from his nap by then so my husband was dealing with my son as well as trying to keep an eye on me. Though my mom was on her way she just couldn’t make it in time – so much for my mom taking care of our son. Things were happening so fast that our son was with us the whole time!

Finally, my husband came into the bathroom. He was asking me questions and of course I wasn’t answering! He then saw how I wasn’t able to communicate and I was on my hands and knees making noises instead of answering him. So that’s when he called Katrina, an intern for our midwives. She told us it was time to get to the birth center ASAP! I couldn’t even get myself dressed. It was time to go, but it was hard to leave and get in the car with contractions so close together and so intense! I started grunting. Little did I know, that was me, actually pushing! I wasn’t able to sit down on the seat. There was so much pressure “down there”. It was only a fifteen-minute car ride but it felt like hours.

Well that’s when I told my husband that I pooped myself. But it turns out I wasn’t pooping myself but my daughter was making her dramatic debut! She was coming out already. We got to Babies in Bloom right in time. Her head was crowning in the car!!!! I wasn’t able to stop the urge to push so the midwives told my husband to carry me in to the birth center. Well he only got me into the entrance of the birthing center. That’s right. That’s where my little girl was born – right there at the entrance to the birth center!

Born right inside the front door of the birth center

I was lying on the floor, right inside the front door of Babies in Bloom. I didn’t have any energy to stand or be on my hands and knees. After I lay down I pushed once and she came flying out. My midwives caught her and then from what I remember, my husband got to hold her while we were waiting for her umbilical cord to stop pulsing. I was so out of it and in total shock. I remember the midwives saying my name telling me how she was on my chest but I felt like I wasn’t able to respond. Yeah it was crazy. I was in shock!

I was induced with my son, so the experience couldn’t have been more different than my first labor and birth. This was a natural birth, under my body’s amazing strength and power. I’ll never forget it and I’ll be proud to tell the story over and over. It was like a wild roller coaster ride. What a great birth story and a dramatic entrance into the world for our little Jolie! 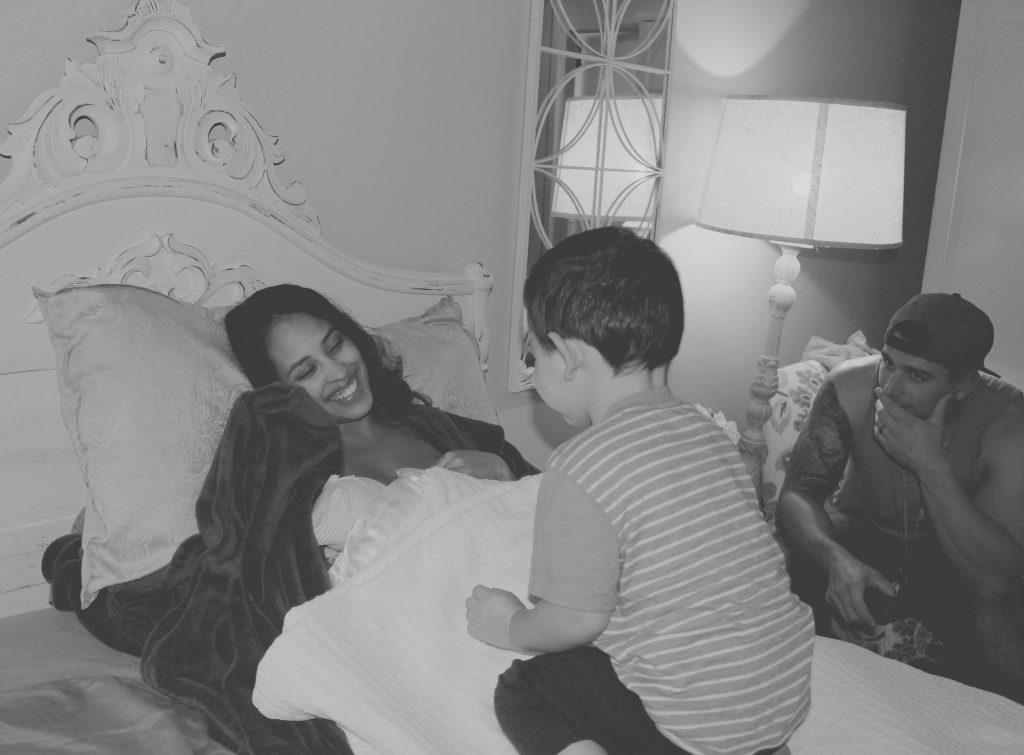