Our Home Birth – Not Exactly OUR Plan, but HIS Plan 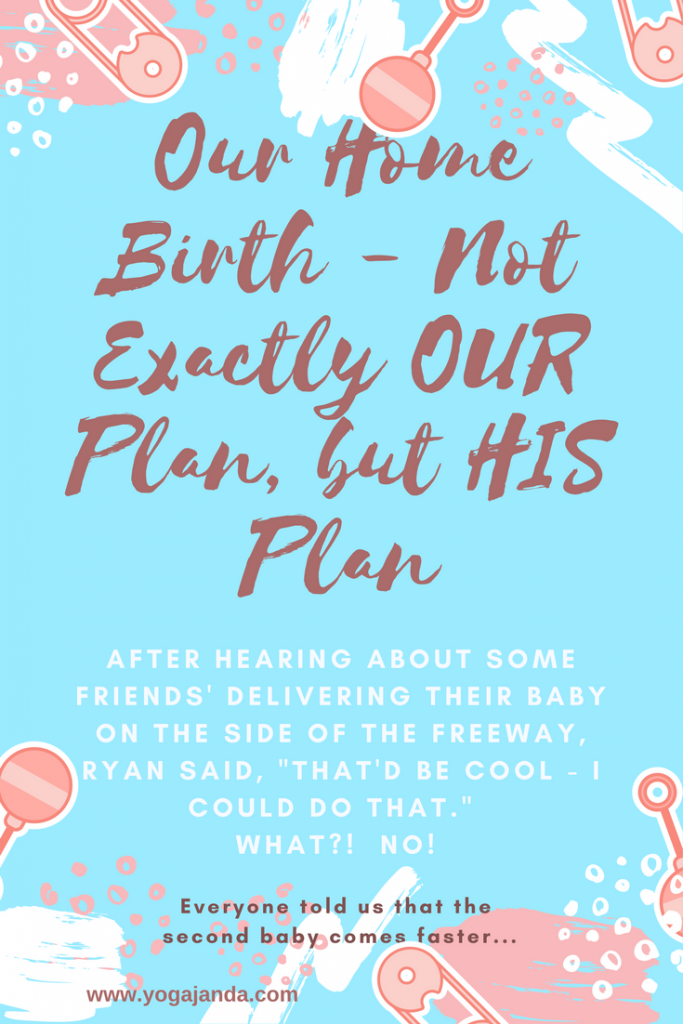 This is such a fun birth story to read. I know! People don’t think of birth as fun. but it really can be an amazing adventure and incredibly empowering.  If you’re having another baby (2nd, 3rd, +), make sure you’re well prepared for Emergency Childbirth. Sometimes babies can come pretty fast, faster than you expect and labor can change very quickly. Here is the best manual to read, Emergency Childbirth: A Manual

so that you are well prepared for your baby’s birth. If you’re local North County San Diego, check out my childbirth classes by clicking here.

After hearing about some friends delivering their baby on the side of the freeway, Ryan said, “That’d be cool – I could do that.”

That was my biggest fear with this pregnancy – that we wouldn’t make it to the hospital on time.  Everyone told us that the second baby comes faster, and since the birth of our first son, we had moved farther away from the hospital.  I had shared this real fear with several people, including our doctor, our birth class, and friends and family.  Everyone responded with, “You’ll be fine – just PLAN to leave earlier”.

Tuesday  – On Tuesday (my birthday), I had some occasional, mild contractions during dinner – enough for hubby, Ryan, and I to take notice. I would stop and breathe through them, but they weren’t consistent enough to keep us from going about a normal evening.  I slept fairly well that night (as well as I could at almost 41 weeks pregnant!) I felt no contractions that I can remember.  I was slightly disappointed that Baby didn’t want to share his birthday with me (too cool for his mama already!).

No Baby For My Birthday

Wednesday – Strong contractions woke me Wednesday morning around 4:30am.  They were strong enough for me to squeeze Ryan’s arm to wake him and start the contraction timer on his phone to track our progress.  I knew today was the day!  We stayed in bed for the next hour and a half, resting in between contractions that were coming every 25-30 minutes.

Time To Call Grandma and Grandpa!

Around 6:00am, when our 2 year old son, Jaxon, woke up, Ryan called Grandma and Grandpa and asked them to come pick Jax up, so that we could labor at home in peace.  At this point I was still able to talk with Ryan, but I was pretty attached to the bed. It was the most comfortable place at the time and I didn’t want to move around much.  Ryan left the room occasionally to tend to Jaxon’s needs and requests (actually more like demands coming from a 2 year old!), then would come back when he heard me call out his name or start moaning, as I rode the waves of contractions.  When my parents arrived to get Jaxon, I heard my Dad ask Ryan if I was decent enough for him to see.  I was, so my Dad came in and said a prayer over me, with excitement in his voice (glad someone’s enjoying this!).  Curled up, with my head in a pillow, I wasn’t much up for chatting at that point, but grateful for the encouragement.

Comfort and Tranquility of Our Bedroom

Ryan text our doctor to give him a heads up that “It was happening today…and that we’ll notify you when we are further along and/or heading to the hospital.” For the next few hours, I labored in the comfort and tranquility of our bedroom.  I had a few bites of eggs and toast and some water and diluted Gatorade, that Ryan had brought me.  Ryan squeezed my hips to alleviate back pain during most contractions.  He helped me in and out of a bath a couple times.  But the most comfortable position, I found, was curled up in bed on my side, working hard to relax through each surge.  I pictured contractions as ocean waves rising and crashing – knowing that they had to fall at some point gave me hope each round.  As with our first pregnancy, once I start contractions, I am pretty intense, quiet and focused.  I don’t move around too much.

By 8:00am, Ryan was timing and tracking contractions, and, though unspoken, we both agreed to wait to leave for the hospital until some consistency – perhaps the “4-1-1 rule” – and for my water to break.  But contractions never got that consistent – averaging 10 minutes apart, but varying quite a bit.  We both thought we still had more time, after all we’d only been at this for a few hours…right?!

At 8:30, I started feeling the urge to push – push out anything – pee, poop, blood, amniotic fluid.  I told Ryan this, so he suggested we move to the toilet to allow for “mess free” pushing.  He helped me walk, as I was pretty weak and contractions were sporadic, so I was careful to hold on to him, in case one came on. With Ryan standing in front of me at the toilet, I held on to his waist while pushing through a couple surges.  I could still talk enough to tell Ryan that I thought my mucus plug was coming out at this point.

A Burst and A Splash! 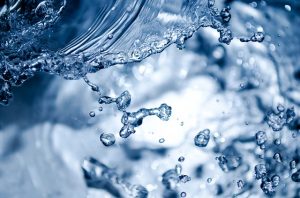 Another contraction ramped up at 8:45.  I told Ryan, “I’m pushing!”  A burst and splash – my water broke.  Immediately following, I felt something bulging and pushing out!  I told Ryan, “I’m pushing something out – there’s so much pressure!”  He assured me, “It’s just your water – we’ll leave for the hospital once your water breaks.”  (Apparently he didn’t realize it had already broken, but I didn’t have the strength to argue this point.)

Another strong contraction and I yelled, “It feels like I’m pushing out his head!”

Ryan said, “No, it’s probably just your bag of waters.”

But then he looked under my legs and saw a tiny head and a pair of ears, hanging out above the toilet water!  He didn’t say anything out loud about seeing a head (he didn’t need to – I knew what I felt!). He calmly said, “Ok, we need to get you off the toilet…”  He quickly lifted my legs to slide me off the toilet and onto the ground. 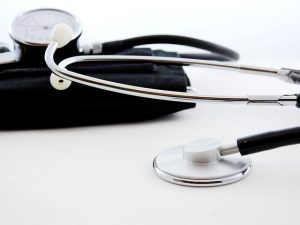 With little time before the next surge, Ryan slipped his finger to feel no umbilical cord around Baby’s neck (something we learned in our childbirth class) and said, “Ok, he’s good, Babe…Push!”

Another push and slippery Baby slides out for “Dr. Daddy” to catch him!

In shock, Ryan held his grayish/blue son and rubbed his back and calmly reassured me, “He’s ok, he’s ok”.  Ryan then put Baby on my chest where he turned a nice pink color and began to cry. Ryan and I stared at each other with wide eyes, conveying both fear and reassurance, before he jumped up and grabbed a few bath towels to collect the pool of blood, and a couple pillows to prop up my head and back.

Once Baby and I were somewhat comfortable, with shaky hands, Ryan text our doctor, “Just delivered Baby at home … What next?”  Immediately Dr. Cap called him back.  After discussing options, Ryan called 911 for an ambulance transport to the hospital.

While waiting, we took a few selfies to document this unbelievable moment in time.  The 911 dispatcher told Ryan in her 14 years of work, she had never talked to someone so calm in this situation as he was. 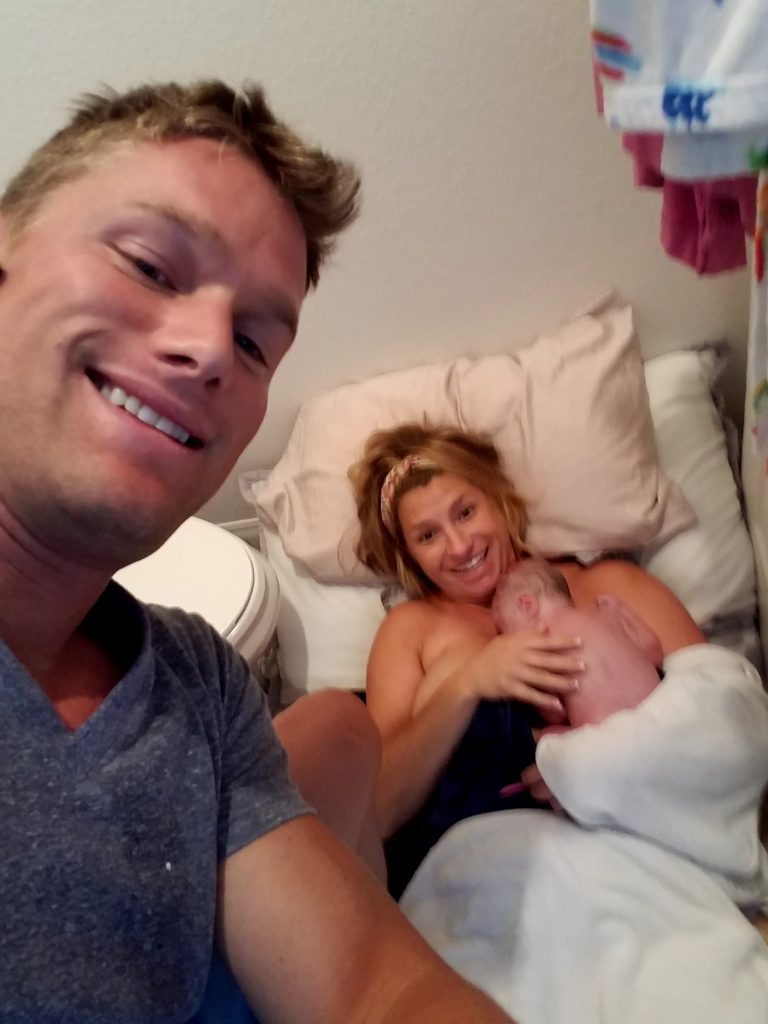 About 15 minutes later, the EMT’s arrived (ughh!  of course they had to be young and good looking!) and walked into our bathroom to find me, spread eagle on the floor (“Hello boys!”).  They were all very encouraging and friendly saying, “Good job mom and dad” and got right down to business.  They cut the umbilical cord and delivered the placenta, then lifted me and Baby onto a gurney and transported us to a hospital closer than the one we had planned, due to my low blood pressure. At the hospital I fainted twice from the amount of blood lost.  Thankfully no blood transfusion was needed and after 48 hours in the hospital we were discharged and happy to get home. 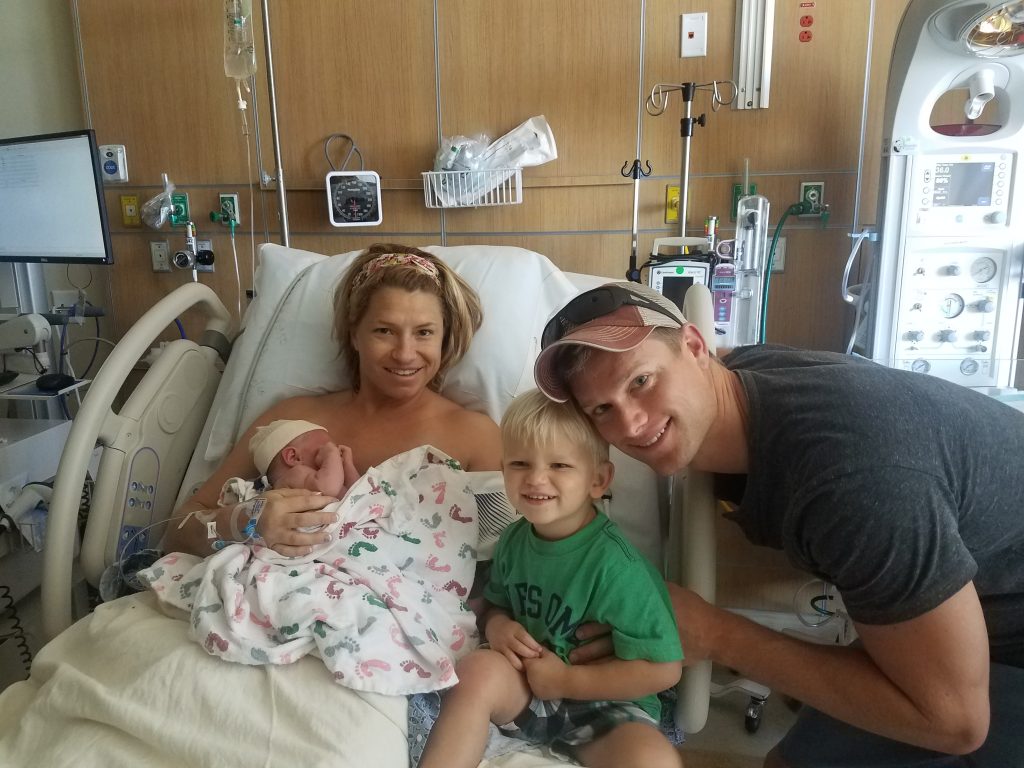 When It come To Birth, Always Expect The Unexpected!

Looking back we can see how this UNPLANNED home birth was actually very well PLANNED out by the Maker and Creator of Baby Wyatt Thomas Vorhees. Everyone asks us, “Why didn’t you leave sooner for the hospital?!”  But if we had left when I felt pushing, we would have delivered in the car or on the side of the freeway, rather than in the comfort, safety, and cleanliness (well – somewhat) of our own home!  And while the ambulance ride, the different doctor and hospital, were not in our plan, they were amazing, encouraging and gave us the care we needed.  We praise God that there were no major complications that we weren’t prepared to handle, and that for our first home delivery, it was pretty… easy (if I can call it that?!).

Needless to say, Ryan’s ego has grown.  He now asks to be referred to as “Doctor.” =)

Our natural birth class instructor, Liza, always emphasized, “stay home as long as possible” (if you want fewer interventions or a natural birth).  So I guess we have her to thank and blame =)

And p.s. If we have a 3rd, we’re not even trying for a hospital – home birth from the start!