Your Bag Of Waters Breaks Before Labor Begins: Rush To The Hospital? Yes Or No? 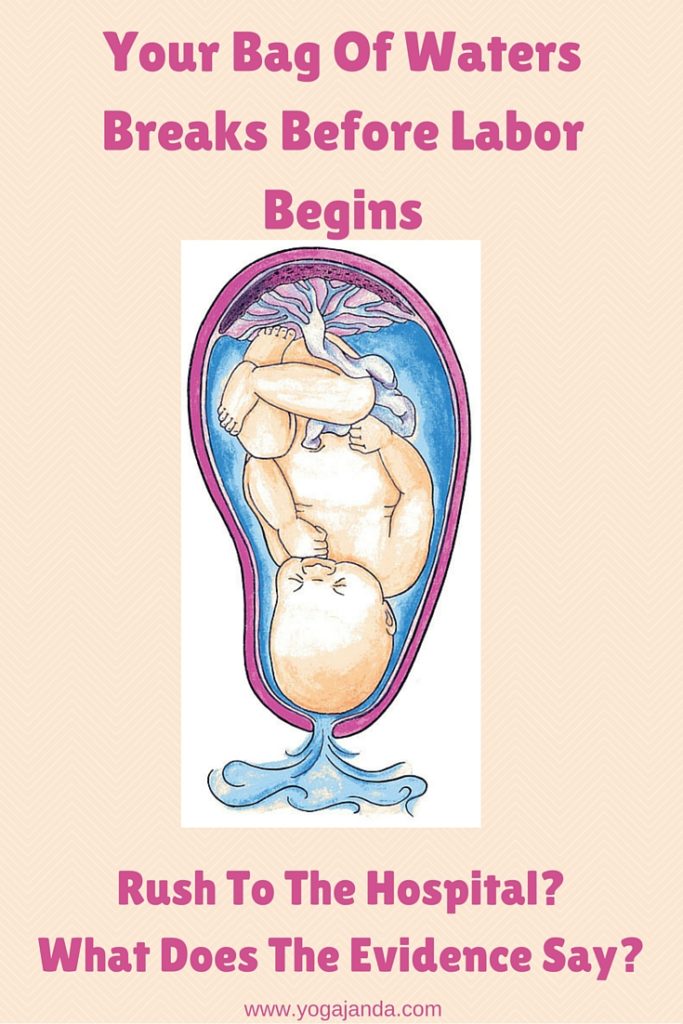 How and when did this issue of PROM (Premature Rupture Of Membranes) and risk of infection become an urgent problem? It used to be that if you were part of the 10-12% of women who were full term (37-42 weeks), and whose waters broke before labor began, you would just ignore it the best you could – NO BIG DEAL – baby is on the way! The best and safest option was to wait for labor to begin on its own. Most women – 85% – will naturally go into labor within 24-48 hours. Take steps way before your due date to avoid this problem altogether. Increase your chances of avoiding induction. Read: 6 Steps To Keep Your Amniotic Sac Healthy And Strong

Going to Your Hospital Immediately Increases Your Risk Of Infection

The primary cause of infection in a woman whose bag of waters has broken is a cervical check. Gravity is causing all fluids to move in a downward direction. But when a nurse, doctor, or midwife does a cervical check, she/he is actually forcing bacteria from the birth canal back up through the cervix into the uterus. This is how the bacteria are first introduced. The bacteria outside and inside the birth canal can be harmful to the amniotic sac, amniotic fluid, and placenta. If an infection develops, it is called Chorioamnionitis. By pushing bacteria from the birth canal into the uterus, you put you and your baby at risk for infection. Of course, when you arrive at your hospital this is one of the first of many procedures that will be done to you.

Worst-Case Scenario – The Reason For The “Emergency”

Liability, insurance companies, and hospitals – businesses – are running the show now. The decision to start labor immediately is not necessarily based on medical evidence. Care providers and hospitals have to give you the worst-case scenario so that they won’t be sued later if you do get an infection. Unless there is clear medical evidence that your health and your baby’s health and safety are in jeopardy, there is no reason to hasten the start of labor. Trusting in and having patience for the process of labor is a real challenge, when everyone around you is telling you you’re putting your baby’s safety at risk. But forcing something, in this case labor to start, is a form of violence and rarely works out well. 40-60% of inductions fail. That means that those inductions end in an unplanned Cesarean and many of those babies end up in the Neonatal Intensive Care Unit.

Labor Needs To Begin In A Calm, Peaceful Environment

Can you picture yourself calm and relaxed in the car on the way to the hospital? I’m guessing, No. Picture the hospital. Is being in an unfamiliar, sterile environment, surrounded by strangers coming in and out of your room a place where you can feel relaxed and comfortable? Hmmm – probably not. If you’re not relaxed and comfortable, labor will not begin. Or it will begin in fits and starts or very slowly. Then you will need to speed things up with Pitocin.

These are the words you should use to describe the best environment to be in where labor can begin:

You’re not going to find that in a hospital!

What Can You Do When Your Water Breaks Before Labor Begins?

The Cochrane study says, “While the original trial report found no difference in neonatal infection rates between immediate induction and expectant management overall, the secondary analyses make clear that length of time between rupture and delivery matters.” If you are GBS positive the study said that awaiting the onset of labor is acceptable as long as the antibiotics are initiated.

Not only does experience show that waiting for labor to begin is the best option for most women, but medical research suggests waiting 18 hours before interfering and inducing labor. Talk to your birth partner about what you’d like to do if PROM happens to you. Then discuss it with your care provider. Ask them if they can provide you with research that backs up the need to induce labor. Remember that the final decisions are yours to make, and yours to live with.

Read more about the research in this article by Henci Goer (below) an acknowledged expert on evidence-based maternity care, author, and speaker.

Study design and results: multicenter, multinational randomized controlled trial in developed countries of 5041 women with confirmed PROM at ≥ 37 completed weeks of gestation. Women were not in active labor, had a singleton fetus in cephalic presentation, and had no contraindication to trial participation.

Problems include but are not limited to the following:

Comment: Based solely on the TermPROM trial, the American College of Obstetricians and Gynecologists (ACOG) recommends immediate induction, generally with oxytocin, for women with term PROM on the grounds that inducing labor will reduce chorioamnionitis, febrile morbidity, and neonatal antibiotic treatments without increasing cesarean rates (ACOG, 2007). The primary argument for immediate induction has always been reducing neonatal infections, which ACOG acknowledges it does not do, and, as can be seen in this deconstruction, with optimal care other benefits are likely to be smaller than currently appear.

By contrast, a Cochrane systematic review published in 2006 also evaluates term PROM management (Dare, 2006). Despite being heavily dependent on the TermPROM trial—three-quarters of the 6800 participants among the 12 trials in total come from the TermPROM trial—the reviewers reach a more tempered conclusion: “Since differences in outcomes between planned and expectant management may not be substantial, women need to be able to access the appropriate information to make an informed choice (p. 12).”

In summary, in the absence of signs of infection, expectant management remains a viable option. Nonetheless, the secondary analyses have given us a more nuanced picture. While the original trial report found no difference in neonatal infection rates between immediate induction and expectant management overall, the secondary analyses make clear that length of time between rupture and delivery matters. They also found that modifiable factors affected infection rates, which means we do not know what they would have been with optimal care.

For those choosing expectant management, the question arises of how long to wait before inducing labor if one prefers to set a limit. Consider the following: Seaward (1998) reported that time from membrane rupture to labor onset of 24-48 hours versus less than 12 hours was an independent predictor of neonatal infection. Infection rates with 24 hours or more to onset of labor were 4% versus the background 2% rate. Hannah (1996) reported that the median time to active labor, not labor onset, after membrane rupture was 16-17 hours. It therefore seems reasonable to wait about 18 hours before inducing labor. Half the group of women will have achieved active labor by this time, and, if induced, the remaining half are likely to have started labor by the 24-hour cut point.

Women with PROM at term who are GBS + constitute a special subset. The Centers for Disease Control (2002) guidelines for management of GBS + women say nothing about inducing women with ruptured membranes at term, which suggests that awaiting spontaneous labor is acceptable provided that antibiotic therapy is initiated. And given that it takes time to instill the recommended dose of antibiotics, common sense dictates that women who prefer not to wait for labor should delay induction until they have an adequate dose of antibiotics on board.

In any case, regardless of GBS status or decisions around whether or when to induce, to minimize the risk of infection, women should avoid digital vaginal exams until established in labor, and their use should be minimized during labor. Data also suggest that oxytocin is the induction agent of choice. It appears to reduce infection rates compared with PGE2 without any offsetting disadvantages.